Do unfinished pictures appeal to connoisseurs? On the one hand you can argue that they show the working methods and creative process of the artist. On the other, they could be considered scraps left over by a painter or a remnant of a long-abandoned project that surely few collectors could want?

While unfinished drawings and preparatory sketches are a regular fixture of the works on paper sector, the commercial viability of unfinished paintings is more mixed.

A famous unfinished portrait of the Duke of Wellington by Thomas Lawrence which was left unfinished in the artist’s studio when he died in 1830 shows the appetite for such works that can exist – although the combination of artist and sitter clearly made it a special case. The work sold for just under £1m at Sotheby’s in December 2013 and, following a fundraising campaign, is now in the National Portrait Gallery.

A 2016 exhibition at New York’s Met Breuer in 2016 titled Unfinished: Thoughts Left Visible may have heightened interest further in this area.

Ultimately how ‘finished’ an individual work is deemed to be or how important are the complete elements to the overall picture is an intriguing and subjective question. How bidders rate those factors is usually the key to interest that emerges. This 2ft 3 x 3ft 2in (67 x 96cm) oil on canvas by Venetian painter Giovanni Domenico Tiepolo (1727-1804) was offered at Sotheby’s in London in July 2015. Depicting the artist’s family, the main figures were mostly complete but the background remained unresolved. Interestingly the artist signed the work with his initials on the dog collar. Estimated at £2.5m-3.5m, it sold for £2.84m (including premium). 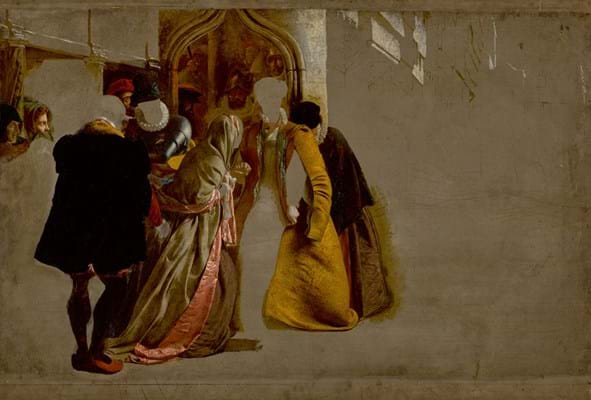 This version of James Drummond’s famous painting The Return of Mary Queen of Scots to Edinburgh which is now in the National Galleries of Scotland is a partially worked oil over pencil on panel. Similarly sized to the primary version, it measures 2ft 8in x 4ft (81.5cm x 1.21m) and is estimated at $70,000-100,000 at the upcoming sale of works from dealer Otto Naumann at Sotheby’s New York on January 31. This Madonna and Child by Cristoforo Savolini (1639-1677) was one of the pictures left unfinished in the artist’s studio after he died. Along with two other incomplete works, it was purchased by his patron, the lawyer Ludovico Ugolini and it relates to a known finished version of The Holy Family, now in a private collection. The 3ft 5in x 2ft 8in (1.03m x 80cm) oil on canvas is estimated at $60,000-80,000 at the upcoming Otto Naumann sale at Sotheby’s New York. This unfinished oil and black chalk portrait by Thomas Lawrence of the actress and writer Elizabeth Inchbald (née Simpson) from c.1796 is being offered at Sotheby’s Master Paintings evening sale in New York on February 1. It is described in the catalogue as providing “an insight into Lawrences’ working method when beginning a portrait” with the head being almost fully worked up while the torso is delineated by the chalk outline. Sourced from a southern US vendor whose mother had acquired it from London dealer Agnews, it is estimated at $150,000-200,000. This portrait by Thomas Gainsborough The Blue Page has provoked some debate over whether it should be considered ‘finished’ or not. It was once thought to be a sketch for one of Gainsborough’s most famous paintings, The Blue Boy. However scholars now believe that it dates from a year after The Blue Boy. The fact that the sitter’s costume is painted in just two shades of blue and the presence of the rather bare background has led to it being called unfinished, although others have argued that this may simply have been how the artist intended. Either way, the 5ft 5in x 3ft 9in (1.66m x 1.13m) oil on canvas still made $3.25m (including premium) at Sotheby’s sale of the collection of their late ex-chairman A. Alfred Taubman in January 2016. This oil on board by Edwin Henry Landseer (1802-1873) titled A dead stag, with sketched figures of a ghillie and hounds was among the works left behind in the artist’s studio when he died and sold in the subsequent auction of his deceased estate. Executed in c.1825-30, the oil on board measures 19in x 2ft (48 x 61cm) and it is being offered with a $100,000-150,000 estimate at Sotheby’s upcoming Otto Naumann sale in New York. With the central figure of the stag highly finished, the catalogue states that it does not appear to be a preparatory drawing but “instead stands as a work in its own right”.

7. Diano’s Massacre of the Innocents This oil painting by Giacinto Diano (1731-1804) is a preparatory sketch for the artist’s large-scale altarpiece in the Santa Maria della Pietà dei Turchini in Naples. Depicting The Massacre of the Innocents, the artist has carefully worked up the figures while quickly filled up the other plains areas of the canvas by applying simple tones. It has a $30,000-50,000 estimate at the Otto Naumann sale at Sotheby’s in New York. When Thomas Lawrence died in 1830, some 200 unfinished portraits were found in his Russell Square house, a few dating as far back as the 1790s – including the famous painting of the Duke of Wellington mentioned above. This oil sketch here depicts Lady Elizabeth Lowther and it relates to a finished portrait painted by Lawrence in 1811. The face and part of her hair are fully painted in oil while the back of her head remains unfinished. It is estimated at $60,000-80,000 at Sotheby’s upcoming Otto Naumann sale in New York.