With the Star Wars saga now more than 40 years old – and still going strong – the memorabilia market buzzes as never before. With so many of the original fans of the first movies now at prime income-earning age, prices for figures, posters and props continue to rise. 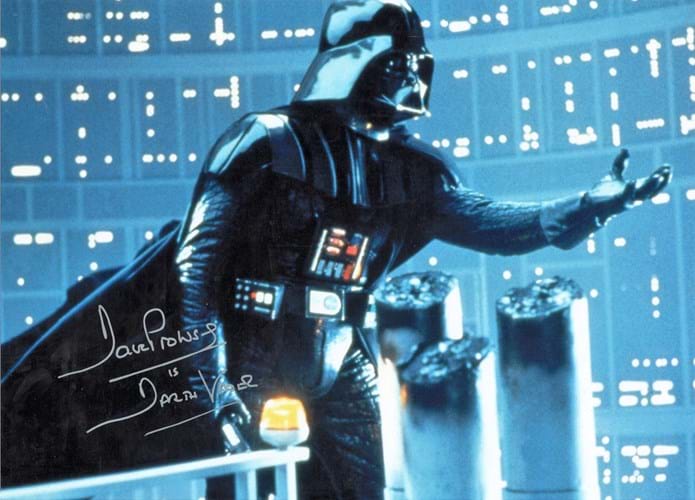 Ahead of Bonhams’ stand-alone 62-lot auction, Designing an Empire: The John Mollo Archive, in London on December 11, we preview that important sale and four other items appearing for sale soon in a galaxy not too far, far away…

John Mollo was the concept artist behind the Star Wars franchise. His personal notebooks and sketchbooks – a wealth of notes and designs which illustrate the artistic development behind the creation of some of the best-known costumes in cinematic history – will be offered at Bonhams on December 11.

It was in 1975, after enjoying success as an advisor on historical military dress for films such as The Charge of the Light Brigade, that Mollo was commissioned by George Lucas to create uniforms and ensembles for the Star Wars project. Lucas urged Mollo to avoid the stereotypical ‘space-age’ look of earlier science fiction productions and instead to focus his designs on the pivotal concept of light versus darkness.

With just three months to go before shooting begun, Mollo went to London film costumiers Bermans and Nathans to get some ideas. Among the lots at the sale is a sketchbook dating from April 1975 to July 1976 showing some of the first hand-drawn costume designs for Vader, Chewbacca and the stormtroopers. It is estimated at £100,000-150,000.

Propmasters, the dealers of movie props, costumes and associated ephemera, is marking its 30th anniversary with a sale held in association with Surrey auctioneer Ewbanks on November 15.

Among the more than 350 lots on offer solely drawn from the firms archive, which spans from the 1930s to present day, is this Darth Vader helmet constructed within the production interim of Star Wars: A New Hope (1977) and The Empire Strikes Back (1980). A Darth Vader helmet constructed within the production ‘Star Wars: A New Hope’ and used for departmental reference – estimated at £15,000-20,000 at Ewbanks.

The fibreglass helmet was not intended for screen use but rather for departmental reference. The chin on the faceplate still features the small triangular cut out, unique to the helmet worn by Vader in A New Hope, yet the dome to the attachment ring of the face plate is 'Empire' in styling. The estimate is £15,000-20,000.

3. Revenge of The Jedi

The Prop Store, based in Rickmansworth, Hertfordshire, conducts a sale of movie memorabilia on November 20. Among the many Star Wars related lots is this rare Drew Struzan-designed single sheet poster for Revenge of The Jedi. A poster for ‘Revenge of The Jedi’ printed before the film’s name was changed to ‘Return of the Jedi’ – estimated at £1000-1500 at The Prop Store.

Following a late title change by George Lucas, these ‘teaser’ posters were recalled and replaced by Return of the Jedi posters. There are two version of this particular sheet: one dated 1982 and the other that is undated and deemed the rarer of the two. This linen-backed ‘undated’ example is pitched at £1000-1500.

A British quad size Star Wars poster from 1977 with artwork by Tom Chantrell carries an estimate of £300-500 at Lawrences of Crewkerne on November 16. Offered in rolled condition, this version of the poster notes that the film was nominated for seven Academy Awards.

A signed colour photo of Dave Prowse playing Darth Vader is pitched at £40-60 by Folkestone autographs and memorabilia specialists Chaucer Auctions on November 21.