The top-seller was the 18th century oil on canvas Venus and Adonis by Jacopo Amigoni. The mythological scene was created as pendant pair with Flora and Zephyr, which is now at the Metropolitan Museum of Art in New York. It took a premium-inclusive £489,000, on the upper end of its £300,000-500,000 estimate.

Francis Picabia’s 1941 Les Baigneuses, Femmes Nues au Bord de la Mer also took £489,000. It had been the top estimated lot before the sale along with and Francesco Barzaghi’s 19th century statue of Phryne (£477,000). Both fell well shy of upper expectations, but completed the top three lots at the auction. 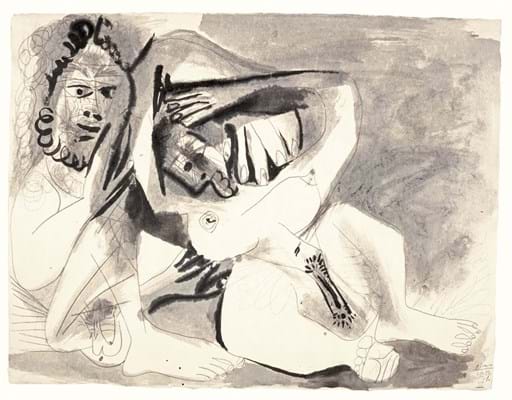 The sale took place in the London saleroom on February 15. It followed a special late-night opening the previous evening, Valentine’s Day. It was the second such sale hosted by Sotheby’s. Last year’s inaugural sale totalled £5.3m.

Lot six was among those that exceeded expectations. This was Gustav Klimt’s Freundinnen (1913), which soared beyond its £70,000 high estimate to take a premium-inclusive £143,750.