An eyewitness account of an officer’s bravery accompanies the sale of a First World War Military Cross at Eldreds Auctioneers next month. 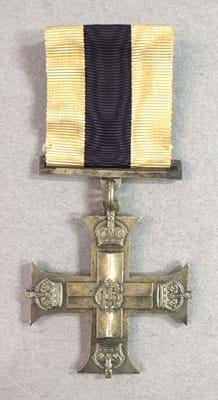 The Military Cross was created in 1914 for officers in recognition of acts of exemplary gallantry during active operations. The example in question was awarded to Captain William Robertson. It recognised his endeavours at the Battle of Cambrai, in 1917, which marked the first large-scale use of tanks for a military offensive. He survived the war and lived until 1942.

In the letter of condolence at the time of his death, Dr Harold Pickles describes to Robertson’s widow (whom he had never met) some of the events of the battle.

It was I who spent with him that memorable day in November 1917 at the edge of Bourlon Wood, when he was wounded and when he so thoroughly earned his Military Cross, he writes.

It was he, an older man, that helped me, (a very young doctor), to get through that most awful day of continuous shelling, such that I shall never forget and with the great anxieties we both had for our wounded.

The lot is estimated at £400-600 at the Plymouth auction house’s sale on June 5. As well as the letter, the lot includes a British War Medal and a Victory Medal.

Robertson served as a medical officer in the Home Guard during the Second World War. During that time he was knocked down by a cyclist during a blackout while crossing the road to a postbox and died four days later. This album, compiled by former reporter John Cullum, is filled with photographs from the glory days of motor racing. It is estimated at £300-400.

The same auction offers an album of photographs of motor racing during its glory days of 1957-60. It features many of the famous drivers of the time such as Juan Manuel Fangio, Graham Hill and Stirling Moss.

It was compiled by former reporter John Cullum and the majority of the photographs were taken by him during his many visits to the Grand Prix and other races. There are shots of other races at Silverstone, Brands Hatch, Goodwood and Aintree as well as the engines and cockpits. Included are two photographs of the record-breaking MG EX181, or ‘Roaring Raindrop’, one unpainted, the other being test-driven, which went on to break the International Class F Record for 1500cc cars at over 245mph.