The art and antiques collection of the late Tory MP who helped to bring Margaret Thatcher to power is coming to auction in Dorchester. 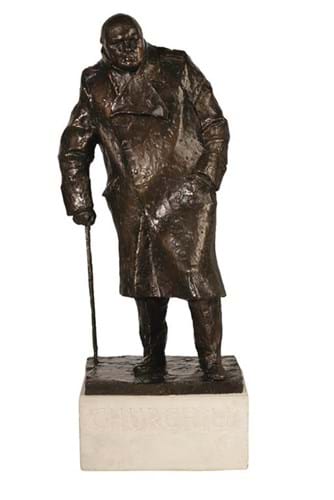 A bronze maquette of the Sir Winston Churchill monument in Parliament Square by Ivor Roberts-Jones. It is being offered at Duke’s Autumn Fine Art sale in Dorchester on September 6-7.

More than 100 items owned by Sir Edward du Cann, including a maquette of the Sir Winston Churchill statue in Parliament Square, will be offered at Duke’s Autumn Fine Art sale in Dorchester on September 6-7.

Du Cann was an MP for 31 years and the longest serving chairman of the powerful 1922 committee, which played a key role in Margaret Thatcher’s rise to power in 1979.

The politician and businessman died in August 2017 aged 93 and now his family are selling some of his collection.

Du Cann was elected to parliament on St. Valentine's Day 1956 and recalled a number of acquaintances with Churchill including sharing a public platform with him during the 1951 General Election.

The Churchill sculpture is a maquette for the large scale moument of Churchill by Ivor Roberts-Jones which stands in Parliament Square and was commissioned in 1971. Roberts-Jones' first important commission came from Lord Beaverbrook in 1961 for a bust of Somerset Maugham.

The Churchill maquette, 20in (51cm) high and on a square white stone base inscribed ‘Churchill’ (2ft high 62cm high overall) is unnumbered but bears the foundry stamp and Roberts-Jones' name. Duke’s have estimated it at £30,000-50,000. The Du Cann collection of lots come from his home at Barrington Court, a stately home close to his former Taunton constituency in Somerset.