A painting by Sir Stanley Spencer (1891-1959) made the year before he died provided the latest test of the artist’s market at Sotheby’s. 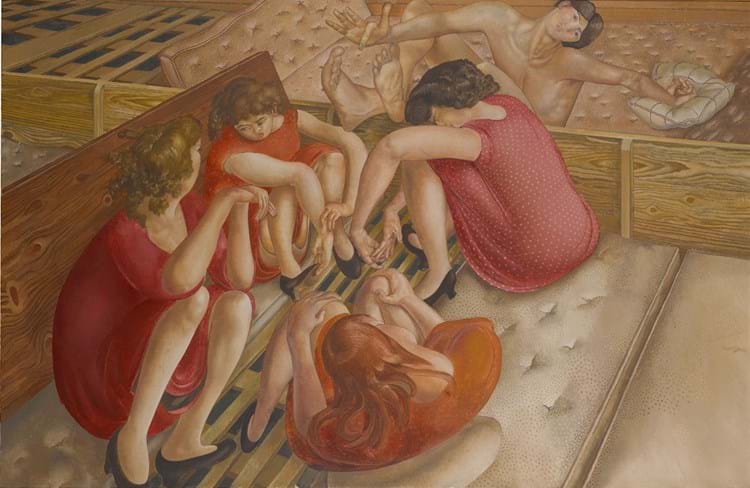 Sir Stanley Spencer's 'Christ Preaching at Cookham Regatta: Punts by the River' from 1958 that sold at Sotheby's for £2.8m. Image: Copyright Sotheby’s.

Christ Preaching at Cookham Regatta: Punts by the River was painted in 1958 and was estimated at £3m-5m at Sotheby’s Modern British art evening sale yesterday.

Despite the vintage subject of the annual regatta at the Berkshire village where the artist lived and market freshness of the work, the pitch was deemed relatively punchy. On the night, little interest emerged in the room before it was eventually knocked down to a phone bidder at £2.8m.

The 3ft 4in x 5ft 1in (1 x 1.54m) oil and pencil on canvas came to auction from a private British seller whose family had acquired it from London dealer Arthur Tooth & Sons in 1959. It was shown in public for the first time in more than half a century at the auctioneer’s exhibition ahead of the auction.

The current record for Spencer at auction was set for another painting of Cookham Regatta that sold at Christie’s in 2013. Christ Preaching at Cookham Regatta: Conversation Between Punts, which sold at £5.3m, was painted three years earlier than the current work and had a rather different composition with more punts and figures.

The picture at Sotheby’s was part of a series of six paintings made to accompany a 17-foot-long centrepiece intended for his ‘Church House’ project.

The project remained unfinished on his death – indeed there was little real prospect of it ever becoming a reality – and the centrepiece now hangs at the Stanley Spencer gallery in the Berkshire village.

Sotheby’s noted in the catalogue that Spencer’s representation of regattas focused on the difference between the middle classes watching on the riverbank and the upper classes who could rent a punt. Spencer once described the idea of renting a punt as “an unattainable Eden” reserved only for the wealthy.

In this picture, Spencer included a self-portrait of himself as a younger man in the background, realising his tantalising dream of floating on the river.