The guitar that set the Bee Gees on the road to Saturday Night Fever and international disco stardom is to be offered at a Wiltshire sale. 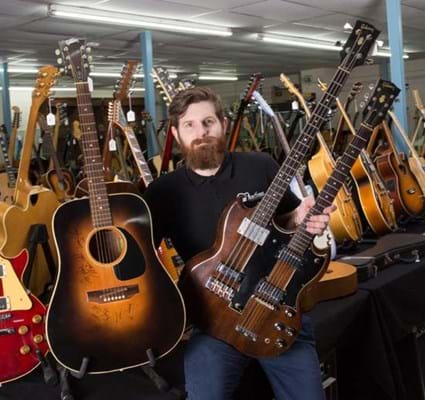 In what the Gardiner Houlgate saleroom is dubbing “the UK’s largest-ever auction of guitars” on September 12, the Gibson J45 acoustic used by Maurice Gibb to compose the band’s 1975 breakthrough disco hit Jive Talkin’ is estimated at £10,000-15,000.

The success of that track led to the Bee Gees being offered the chance to contribute to the soundtrack of the hit 1977 film, Saturday Night Fever. It was the film’s soundtrack that breathed new life into the disco craze of the late 70s and propelled the Bee Gees to global chart dominance.

Maurice – one of three Gibb brothers in the group – composed the track on the guitar after driving across a bridge in Florida and hearing the rhythm made by the car’s tyres on the road surface.

In 1987, he donated the guitar to BBC Radio 1 to give away as a prize on The Bruno Brookes show, for which it was autographed by all three Gibb brothers. The prize winner subsequently sold the guitar on Channel 4’s Four Rooms show in 2014.

As with many long-standing bands, the Bee Gees’ sound and style changed from their early days. Ballads had been the hallmarks before disco took over, with late 1960s hits such as To Love Somebody, New York Mining Disaster 1941 and Massachusetts (their first number one hit in the UK and Australia and one of the best-selling singles of all-time).

Jive Talkin’ was the first single from the Bee Gees' 1975 album Main Course, which marked the turning point in their career as they moved to disco. The song was regarded as the Bee Gees’ comeback after a lull in popularity in the early 70s after the 60s successes.

A reminder of that earlier Bee Gees era is another instrument on offer in this Corsham auction: a second Maurice Gibb-owned guitar, a custom-made 1968 Gibson EBS-1250 double-neck which combines a bass and guitar into a single instrument.

The guitar was sold by Maurice in 1974 to another musician and collector, who has owned the guitar ever since. Now estimated at £7000-10,000, it is believed to be the only one of its kind made by Gibson in 1968. Luke Hobbs, the Gardiner Houlgate auctioneer who will sell the guitars, said: “Bee Gees’ instruments are exceptionally rare and neither of these guitars has ever been offered for public auction before.”

He added: “These guitars represent the two great phases of the Bee Gees’ career. The double-neck comes from the 60s and early 70s when they sang popular ballads; the J45 represents their comeback and the disco years. It’s not often you get to encapsulate a band’s career so succinctly in a single auction.”

Both guitars are being sold by UK private collectors.

The Maton guitar used by George Harrison at The Beatles’ last appearance at Liverpool’s Cavern Club in 1963 will also be auctioned on September 12. It is estimated at £300,000-400,000.