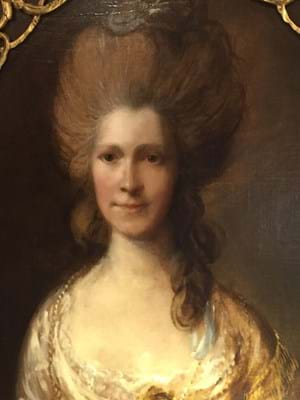 Perhaps the star of the trio was Mrs Thomas Fletcher (1748-1852). Born in Scotland, she first married Thomas Fletcher in 1775 and had a son and daughter with him. He died shortly after, however, and she remarried. She continued to live in Scotland where she lived to the magnificent age of 103. She experienced the reigns of George II, George III, George IV, William IV and died during the reign of Queen Victoria.

Previously sold at Christie’s in 2000 for £64,250, the portrait had since been cleaned, removing later over-painting. It was also offered in a traditional ‘Gainsborough’ Irish frame. The work was purchased by a private collector.

The sale of this and three similar portraits came in time for Great Grooms’ 25th anniversary, celebrated earlier this month. The occasion was marked with a dealer open day which included a marquee and open garden with drinks and canapés.

James Podger runs the centre, which offers a range of furniture, jewellery, clocks, paintings and other antiques. Of the other three Gainsborough portraits that sold, one depicted an officer of the 1st Dragoon Guards, painted in 1756. Another shows Elizabeth Ives, Mrs Thomas Butcher, painted in 1772.