The biannual series of Islamic and Indian art auctions held in April and October offers a wide range of art and artefacts celebrating the rich and diverse cultural heritage of the Middle East and the subcontinent. This year’s ‘Islamic Week’, running from October 22-26, includes sales from five auction houses, highlights of which are pictured below. A page from a late 18th or early 19th century costume album attributed to Fenerci Mehmed of Ottoman Turkey carries an estimate of £200,000-300,000 at Sotheby’s Arts of the Islamic World sale on October 24. 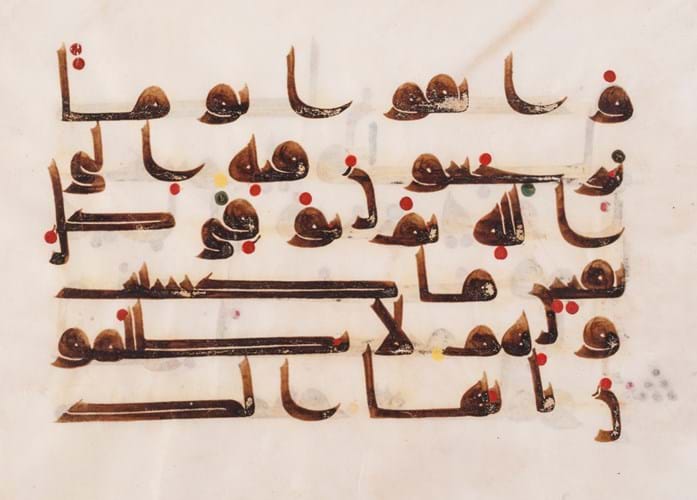 In the manuscript section of Roseberys’ October 22 sale is this Kufic Qur'an folio penned in near east or north Africa in the 9th or 10th centuries. The (19 x 26cm) double-sided vellum leaf includes six lines of sepia Kufic with red, yellow and green dots marking the vocalisation. Estimate £2000-3000. Christie’s sale on October 25 includes a much larger fragment of a Kufic Qur'an of similar style and date. Comprising 67 consecutive folios, it has an estimate of £40,000-60,000. A ceremonial quiver and bow holder from the Treasury of Lahore is estimated at £80,000-120,000 at Bonhams' Islamic and Indian Art sale in London on October 23. Made in leather and gold thread, it was almost certainly made for Maharajah Ranjit Singh, Lion of the Punjab who commissioned a quiver in 1838 to wear at the wedding of his eldest son and heir Kharak and is depicted wearing it in a painting by the French artist Alfred de Dreaux, now in the Louvre.

Ranjit Singh died the following year, plunging the Punjab into years of instability which prompted the East India Company to invade and annex the state. At the conclusion of the First Anglo-Sikh war in 1846, the victorious company acquired the Royal Treasury in Lahore, including the Koh-i-Noor diamond and the Timur Ruby which were sent back to London as gifts for Queen Victoria. At some point, the quiver passed into the hands of the First Marquess of Dalhousie, Governor General of India 1847-54. Bonhams’ head of Indian and Islamic art, Oliver White, said: “This is a wonderful piece from the fabled Treasury of Lahore, and all the circumstantial evidence points to it being the one made in 1838 for Ranjit Singh, Lion of the Punjab – the state’s greatest and most famous leader.

“The quiver was made purely for ceremonial purposes, and appears to have been rarely worn. As a result, it is in excellent condition.” A pendant to a painting called Woman Counting on her Fingers in the Bibliothèque Nationale, it carries the same playful inscription including the name of the patron for whom it was created, Mirza Muhammad Shafi and the addition khuddam-i natijatu’l-vuzara’i, translated as “one in service to an offspring of viziers”. Among the more recent items included in Chiswick Auctions’ sale of Islamic & Indian Art on October 26 is this silver gilt and blue enamel box with the inscription Qasr Abedin Al Amer 24 Muharram 1358 – ‘The glorious Abedin Palace 15th March 1939’. This fine box was one of several made for the royal family by the Egyptian jeweller Naguib Bey to mark the royal wedding of Mohammed Reza Pahlavi, the last Shah of Iran, and Princess Fawzia, daughter of King Farouk of Egypt. The wedding took place at the Abedin Palace in Cairo on March 16, 1939. The boxes were gifted to royals, nobles and important diplomats attending the wedding with this example, estimated at £2000-3000, from ‘a noble private collection.’ An exceptional late 18th or early 19th century costume album attributed to Fenerci Mehmed of Ottoman Turkey carries an estimate of £200,000-300,000 at Sotheby’s Arts of the Islamic World sale on October 24.

Albums such as this were produced mainly for a foreign audience who wished to obtain detailed images of current and past fashions or a handy guide to identify who was who at the court of the sultan.

Three other albums painted by Fenerci Mehmed are known and occasionally single leaves or small groups of these watercolours have appeared on the market.

This example, previously owned by an ambassador to Iran and acquired by the vendor in 1987, is particularly comprehensive, its 124 leaves giving a catalogue of the costumes of the Topkapi palace in the 19th century and the different costumes worn by the military during official ceremonies. Each subject is numbered and identified in Ottoman Turkish and later in French.

Little is known about Fenerci Mehmed's life. The name Fenerci derives from his previous occupation (a lantern or fener maker) and it seems he only became a painter after his shop burned down during the Bayezid fire. He died sometime in the mid 19th century, either at the end of the reign of Mahmud II (r.1808-39) or early in the reign of Abdulmecid (r.1839-61).