A 19th century marble bust of Anne of Cleves, estimate £4000-6000 at Cheffins as part of the residual collection of T. Crowther & Sons.

Comprising over 80 items of architectural salvage, sculpture, fire furniture and garden urns, the compilation with a global estimate of £70,000-100,000 has been consigned by Richard Crowther, great-grandson of the founder of the company. They go under the hammer on June 13-14.

Crowther and Sons was founded in 1880 in Fulham and was well established before the First World War. The company was split into two sections in the 1940s; Albert Crowther trading from Syon Lodge and T. Crowther & Sons in Fulham. 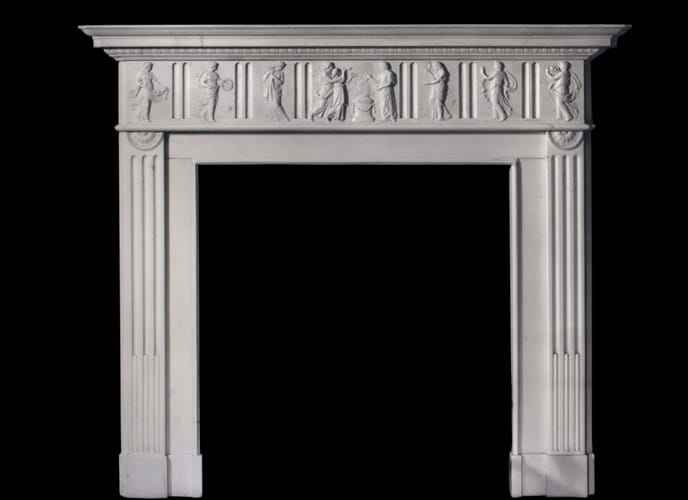 A George III neoclassical marble chimneypiece, estimate £7000-10,000 at Cheffins as part of the residual collection of T. Crowther & Sons.

The post-war years were a boom period as bomb damaged buildings were repaired or demolished, allowing the firm to buy large quantities of chimneypieces, panelling and garden ornaments from some of London’s finest homes.

Richard Crowther joined the firm in 1969 and continued the family business until its closure in 1992. A number of sales have since been held to disperse the stock and collection.

Luke Macdonald, director at Cheffins describes this offering as “the remaining stock from the T. Crowther & Sons business as well as Mr Crowther’s personal collection of antiques, chimney pieces, sculpture and works of art.” An early 18th century lead wine cistern cast with scenes of Ovid’s Metamorphoses, estimate £15,000-20,000 at Cheffins as part of the residual collection of T. Crowther & Sons.

Among the highlights is a rare early 18th-century lead wine cistern cast with scenes of Ovid’s Metamorphoses which is expected to make from £15,000 - £20,000 and, one of four chimneypieces on offer, a late 18th-century marble example carved with panels of the Vestal Virgins carrying an estimate of £7000-10,000.