English Furniture, works of art and ceramics from two patrons of the arts are to go under the hammer at Doyle in New York next week.

The sale of over 360 lots on January 17 comprises pieces collected by Noel and Harriette Levine that decorated their Park Avenue apartment and their country home in Bedford, New York.

Among the institutions to which the Levines were donors were the Metropolitan Museum and MoMa, New York, both of which have galleries named in their honour.

Mrs Levine was a stylish interior decorator who filled their homes with elegant pieces of English furniture (oak and vernacular and Georgian mahogany), as well as oriental blue and white porcelain, Staffordshire pottery, embroideries, silver and decorative objects. Pictured here is a selection of items that will be included in the sale. 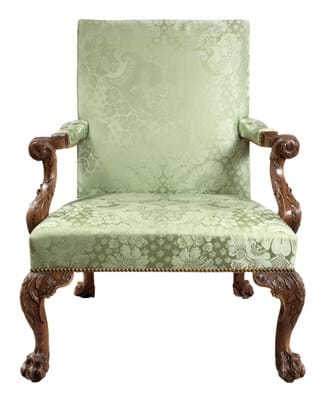 One of a pair of George II walnut library armchairs. They are thought to have almost certainly been commissioned by Sir Philip Yorke, (1690-1764), Baron Hardwicke of Hardwicke, Gloucestershire, and Earl of Hardwicke and Baron Royston, as part of the larger suite of 10 chairs and two pairs of sofas for the newly created Long Gallery at his seat, Wimpole Hall, Cambridgeshire. The suite remained there until 1930. These two chairs were sold from the collection of Mr and Mrs Martin Gersh at Sotheby’s New York in 2006. They have an estimate in the Doyle sale of $250,000-350,000. 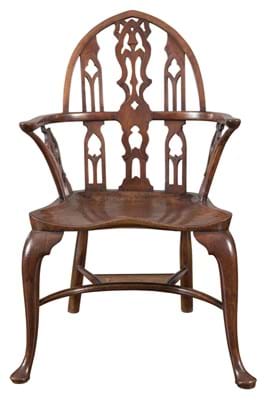 One of a matched pair of 18th century George III gothic Windsor armchairs in yew, elm and beech that have an estimate of $4000-6000 in the Doyle auction. Six English 18th century salt-glazed pottery plates comprising three chargers, the largest measuring 16in (41cm) and three reticulated plates, measuring 10.5in (25.5cm). They have an estimate of $1000-1500 in the Doyle sale.