A previously unrecorded teapot attributed to a pioneering American porcelain factory sold at a Woolley & Wallis auction today for £460,000. The vendor of the teapot, a private collector from south-west of England, had bought it recently in the Midlands for just £15. 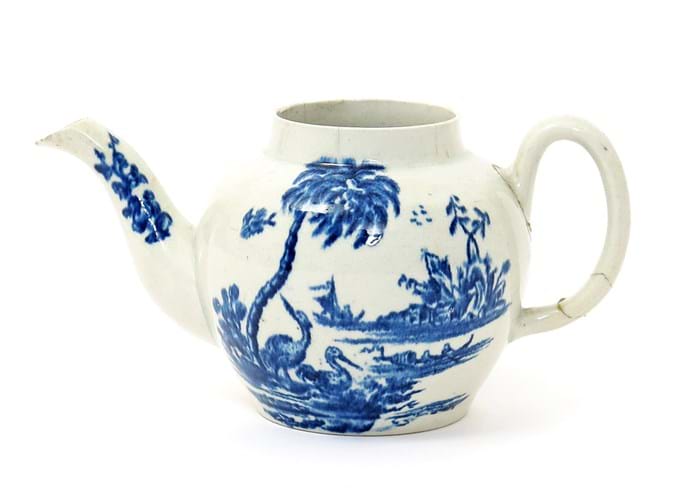 The teapot attributed to the John Bartlam factory in Cain Hoy, South Carolina which sold for £460,000 at Woolley & Wallis.

The bidding at the auction in Salisbury opened at £10,000 but rose quickly in increments of £5000 up to £200,000. Competition between dealer Rod Jellicoe in the room and another interested party on the phone then continued in increments of £10,000.

Auctioneer Clare Durham finally knocked down her gavel to a round of applause from the saleroom with Jellicoe placing the winning bid.

The vessel, only the sixth piece known from the John Bartlam factory in Cain Hoy, South Carolina, was estimated at £10,000-20,000 by Woolley & Wallis. Another view of the teapot attributed to the John Bartlam factory in Cain Hoy, South Carolina. It sold for £460,000 at Woolley & Wallis.

Low-fired phosphatic soft paste porcelain sherds were found at the Wando site in 2007, followed in 2010-11 by the discovery of a series of four blue and white teabowls and a saucer in English collections.

ATG digital subscribers can read our detailed guide on John Bartlam and the early history of American porcelain.