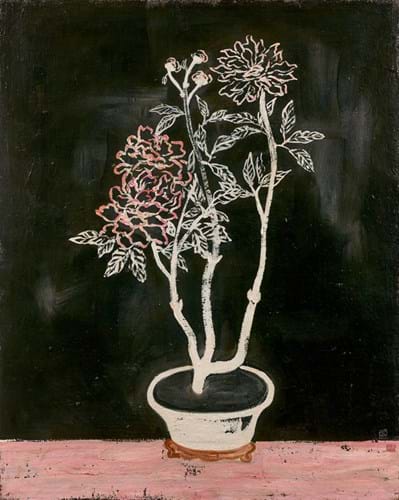 Sanyu’s Pot of Flowers painting sold for a hammer price of €6.9m (£6.1m) at Aguttes on December 18. Photo credit: Aguttes.

Pot of Flowers or Peonies, a signed 3ft x 2ft 5in (92 x 73.5cm) oil on canvas depicting a flowering plant, was consigned from a private collection in the Ile de France region.

It was appearing on the market for the first time and was estimated at €3m-€4m.

The work is listed in the artist’s catalogue raisonné and featured in a Sanyu exhibition in the Netherlands approximately 70 years ago.

The artist (also known as San Yu) was born in Sichuan in 1901 and studied in Japan before moving to Paris in 1920. He exhibited regularly at the Salons d’Automne during his lifetime but interest has also been raised more recently after an extensive retrospective of his work was held at the Musée Guimet in 2004.

Pot of Flowers was deemed an attractive example of his work and it duly brought a number of bidders at the sale held at Hotel Drouot on December 18 and was finally knocked down at €6.9m (£6.1m).