The early bicycles taking design beyond the Boneshaker and Penny Farthing

Boneshakers and Penny Farthings were the forerunners of the bicycle we know now but were hardly practical as everyday transport for the masses. Step (or pedal) forward the ‘safety bike’. 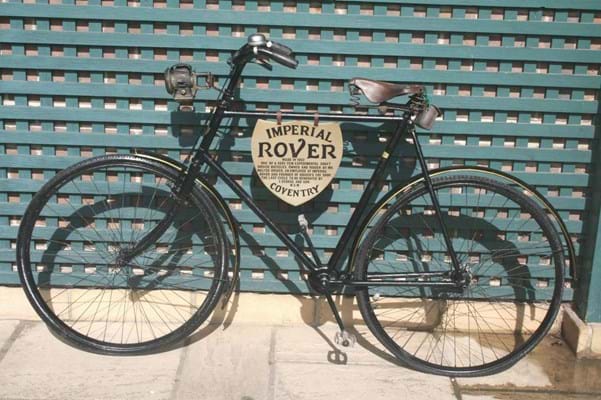 This was the real parent of the modern bike, featuring the propulsion system below the frame, cranks connected to the rear wheel by a chain and lower saddle. And, increasingly, equally sized wheels, with Dunlop pneumatic tyres appearing in Britain in 1888.

One of the most important breakthrough models was the Rover II from 1885 – the first modern bike in effect, designed by John Kemp Starley (1854-1901), successful and much copied.

A stand-out lot at Transport Collector Auctions (in association with Dominic Winter Auctioneers) on May 11 is a “very rare”, JK Starley, Rational Rover safety bicycle c.1889. It is estimated at £10,000-15,000 in the Motoring Literature and Early Cycling sale at South Cerney, Gloucestershire.

TCA director Peter Card says: “This was a historic design, being the first practical safety bicycle, then the Holy Grail of the cycle industry as this bicycle was easy to mount and ride, incorporating a low saddle and chain drive to the rear wheel, key design features that were instantly copied by others, and that allowed for a resurgence in the industry.”

As shown in the photograph above, the typically ‘straight’ modern-day diamond-style frame is more wavy in this early model, and the wheels are not quite equal, but it is broadly close to bike design now.

The success of the safety bicycles led to a ‘golden age’ of cycling and it became a craze. Firms such as Rover, Opel and Peugeot, which are now best known for cars, started by making bikes.

JK Starley (according to jkstarley-bicycle.org.uk) moved to Coventry at the age of 17 following in the footsteps of his uncle James, who “brought an entirely new industry - the bicycle industry - to Coventry, when the city’s industrial fortunes were at a low. James with William Hillman also patented the ‘Ariel’ bicycle in 1870 - one of the world’s first Penny Farthings”.

John worked with his uncle before finding a business partner, William Sutton, in 1879 and five years later Starley & Sutton produced the first ‘Rover’. The Rover Cycle Co was formed in 1896.

John died suddenly in 1901. The company produced the Imperial Rover motorcycle in 1902 and the first Rover motorcar in 1904. In 1905 the company name became the Rover Co Ltd. Information plaque on the early bike dating from 1902 made by Imperial Rover in Coventry. The estimate at Lawrences Auctioneers of Crewkerne is £1500-2000.

A day after the TCA sale, Lawrences Auctioneers of Crewkerne is offering another interesting early bike. Dating from 1902, this 'Imperial Rover' example was made in Coventry. It was one of a few shaft-driven experimental bikes that were made by the firm and it was ridden by Walter Driver, an employee of Imperial Rover and founder of Driver’s Toy Shop.

Lawrences Auctioneer Simon Jones says: “This is an historically important bicycle that would make a tremendous addition to a collection or museum. It has survived in remarkably good condition for its age and comes with a metal plaque which details information about it.” The 19th century ‘Boneshaker’ Velocipede bicycle, c.1865, maker unknown, which sold for £3000 at the Thomson Roddick auction in Dumfries on March 18.

If you do prefer the earlier, not-that-safe world of bicycles, then a version offered at the Thomson Roddick auction in Dumfries on March 18 would have been of interest.