A sapphire and diamond coronet designed by Prince Albert for Queen Victoria has been acquired by the V&A Museum. It was previously sold by a London dealer to an overseas buyer but was blocked from export by the government in 2015. 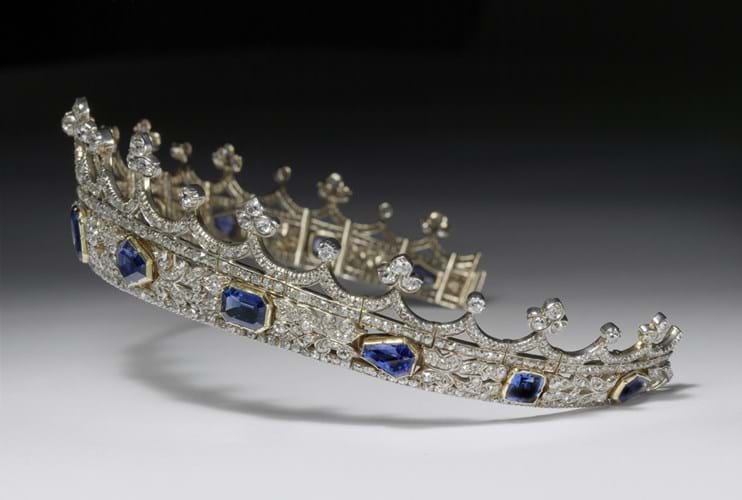 Queen Victoria's sapphire and diamond coronet, designed by Prince Albert and made by Joseph Kitching, London, 1840-42, which has been acquired by the V&A Museum. Copyright: Victoria and Albert Museum, London.

The export bar gave UK buyers an opportunity to raise the £5m (plus £1m VAT) asking price to keep it in the country.

While the amount paid to acquire the coronet has not been disclosed, it was bought by Irish-American financier and hedge fund manager William Bollinger, who the V&A said had “generously gifted” it to the museum. Bollinger and his wife Judith have also endowed the V&A’s jewellery gallery which will reopen after refurbishment in 2019. The coronet which was subject to a temporary export licence bar in 2015 but will now go on public display at the V&A in 2019. Copyright: Victoria and Albert Museum, London.

The coronet was designed by Prince Albert in 1840, the royal couple’s wedding year, to match a brooch with the same gemstones that he gave her the day before they were married. Most of the stones came from jewellery given to Victoria by William IV and Queen Adelaide and it was made by the goldsmith Joseph Kitching at a cost of £415.

The design was based a symbol which appears on Prince Albert’s coat of arms and was intended to represent enduring love. Queen Victoria wore the coronet for the first of her portraits by Franz Xaver Winterhalter painted in 1842, and was also known to have worn it at the 1866 state opening of Parliament (the first she had attended since Albert’s death in 1861), with her crown carried on a cushion on this occasion.

Director of the V&A Tristram Hunt said: “We are extremely grateful to William Bollinger for his incredible generosity. His gift allows us to display a jewel so intimately associated with Victoria and Albert that it will instantly become part of the identity of the museum itself.”

After Victoria’s own death in 1901, the coronet was inherited by King Edward VII and then by George V and Queen Mary, who gave it to their daughter, Princess Mary, on her marriage to Viscount Lascelles in 1922. It was subsequently sold privately before the London dealer in turn sold it to the export licence applicant.

Following the withdrawal of the export licence application and the V&A acquisition, it will now go on public display as the centrepiece of the museum’s William and Judith Bollinger Jewellery Gallery in 2019, the bicentenary year of the birth of both Victoria and Albert.