Dealer Philip Mould was among the bidders at Sotheby’s sale of the Yeats collection this week. The London dealer and presenter of the BBC’s Fake or Fortune secured a chalk portrait of the poet WB Yeats. He saw off strong competition for the 1907 study as the work by Italian artist Antonio Mancini (1852-1930) went over eight times its £8000-12,000 estimate before it was knocked down at £90,000.

The 23 x 18in (59 by 46cm) coloured chalks on paper was completed by Mancini in roughly an hour’s sitting according to the catalogue.

Mould told ATG that he bought it for stock and is anticipating museum interest.

“Images of poets are rarely if ever as successful as this,” he said. “The artist and the subject were magically engaged – Mancini managed to capture his poetic energy and verve. Add the provenance and it was obvious that this was greatly underestimated – we could not let it go.”

Shortly after the auction, Mould posted the tweet below.

Sometimes even art dealers buy things they don't want to sell. Today's acquisition: W.B.Yeats by Mancini 1907 that has never left the family pic.twitter.com/PuEZ4XuLq4

Also bidding at the Yeats sale at Sotheby’s were a number of Irish institutions.

Following an outcry by cultural figures in Ireland that important items relating to arguably the country’s leading artistic family would be lost to the nation, The National Gallery of Ireland bought 10 lots including portraits, sketchbooks, watercolours and photographs.

Elsewhere in the sale, another portrait by John Butler Yeats, this time of the watercolourist Mary Balfour Herbert sold at £35,000 (est: 15,000-20,000). It was bought by the trustees of Muckross House – the Tudor-style manor house in County Kerry which was built by her and husband Henry Arthur Herbert in 1843. 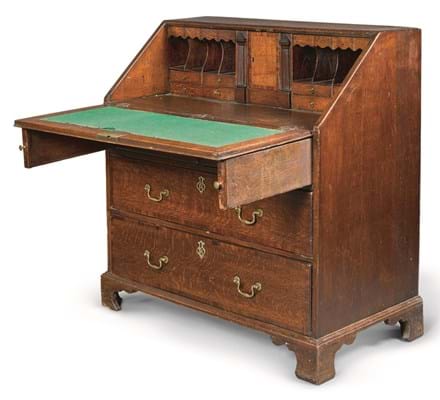 One of the strongest competitions came for a desk used by WB Yeats which fetched five times its top estimate when it was knocked down to a private Irish buyer at £150,000.