Gustav Klimt landscape sells for £42.5m at Sotheby’s auction - third highest price ever for an artwork sold in Europe

A shimmering floral landscape by Gustav Klimt (1862-1918) was knocked down at £42.5m at Sotheby’s evening sale of Impressionist & Modern art in London on March 1. 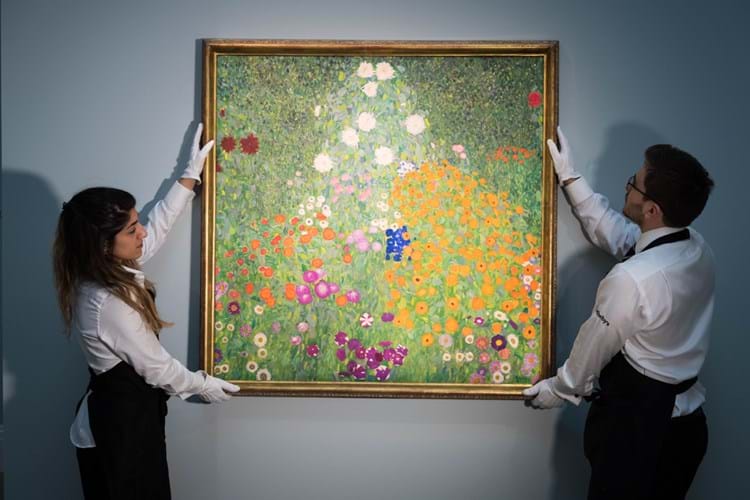 ‘Bauerngarten (Blumengarten)’ by Gustav Klimt that led Sotheby’s Impressionist & Modern art evening sale after it was knocked down at £42.5m.

With overseas interest encouraged by the ongoing weakness of sterling, four phone bidders were in contention for Klimt’s 1907 painting which had last appeared at auction at Christie’s London in November 1994 where it sold for £3.4m.

Sotheby’s had arranged an ‘irrevocable bid’ in advance of the sale meaning the lot was always bound to sell on the night.

It was offered with an ‘estimate on request’, believed to be in the region of £35m.

The 3ft 7in (1.1m) square oil on canvas Bauerngarten (Blumengarten) was painted during one of the artist's summer trips out of Vienna to Litzlberg and, according to the catalogue, it dated from ‘the golden period of Klimt’s career’.

It depicted a profusion of poppies, daisies, zinnia and roses and, although it was not in the same commercial bracket as a figurative subject from the same period, the painting still had plenty of appeal and made a relatively strong sum.

Asked by ATG after the auction if the 'irrevocable bidder' had in fact secured the Klimt landscape, Sotheby's European co-head of Impressionist & Modern Art, Helena Newman, who conducted the sale from the rostrum responded: "Likely not, given that four bidders were competing for it".

Elsewhere in the sale, an Amedeo Modigliani (1884-1920) portrait also attracted interest against a £10m-15m estimate.

Portrait de Baranowski had been acquired by the vendor at a Sotheby's sale in London in June 1998 where it had fetched £3.9m. It had later been offered at Christie's New York in November 2013 where it was pitched at $25m- $35m but had remained unsold.

Here, three bidders competed for the 1918 oil on canvas until it was eventually knocked down at £14.1m.

The Sotheby’s sale followed Christie’s Impressionist & Modern evening sale and Surrealist art auction the night before. Christie’s combined total was a premium-inclusive £136.9m and the sales were led by Paul Gauguin’s Te Fare (La maison) which made £20.3m with premium, while a record was posted for René Magritte’s La corde sensible which fetched £14.4m.