Probably best kept out of the hands of children unless, like the member of Bonhams' staff seen here, they are wearing white gloves, inscribed firsts of ‘Harry Potter and the Philosopher's Stone’ are getting seriously expensive. 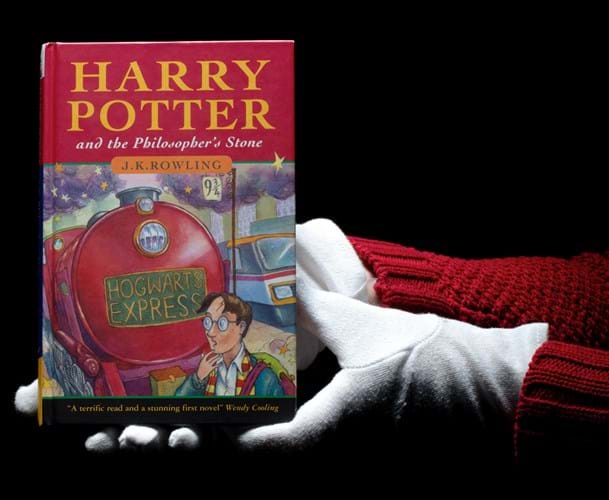 The inscribed copy of ‘Harry Potter and the Philosopher's Stone’ that sold for a record £85,000 at Bonhams.

At the end of a year that marked the boy wizard's 20th birthday, an exceptionally well preserved and inscribed example from the small first impression run almost doubled the previous auction record for the book in selling at £85,000 in a November 15 book sale in the Knightsbridge rooms.

JK Rowling would have received a number of copies when the book that was to launch a publishing phenomenon appeared on the last day of June, 1997. Just a few weeks later she inscribed this copy "For Meera, Donnie, Nastassia and Kai with lots of love from Jo (also known as JK Rowling)".

The author and Meera had met when their daughters, Jessica and Nastassia, were attending the same nursery school in Edinburgh.

The first print run was a small one, but the real prize is the issue of 500 copies that appeared in laminated hardback form – the remainder being issued as paperbacks.

Around 300 of those precious hardback copies were sent to libraries and, in the way of such things, would have picked up institutional stamps, labels, etc., and, as they passed from one eager young reader's hand to another, become rather worn.

Prices for the prized first issue copies seemed to have peaked in 2007, when the seventh and last book in the series was published and when a signed copy of the first made £23,000 at Bloomsbury Auctions.

But then in December 2016, on the very eve of Harry's anniversary year, an “almost mint” signed and inscribed copy doubled that record in selling for £46,000 at Sotheby's. As the young wizard's special year edged towards its close, that record came close to doubling once more.

Straightforward copies of the first paperback issue of 1997 have made as much as £4000, and a signed and inscribed example, £7000.