Sotheby’s Old Master evening sale in London last night was somewhat short of stellar works but the auction registered a decent performance for the material on offer. The Flagellation by the ‘Master of the Osservanza’ that sold for £1.15m at Sotheby’s.

The current difficulties in sourcing high quality market-fresh material in this sector were in evidence but a number of lots still drew decent bidding and the 83% selling rate was the second highest ever for an Old Master evening sale at Sotheby’s.

With 33 of the 40 lots finding buyers, the sale generated a hammer total of £12.2m which was above the £7.99m-11.9m presale estimate. Alex Bell, co-chairman of Sotheby’s Old Master paintings department said after the sale: “There were no obvious blockbusters but there was still a strong supporting cast.”

One of the works he was referring to was an unusual gold-ground Italian panel catalogued as by the ‘Master of the Osservanza (fl mid-15th century)’. It depicted the Flagellation of Christ above the coats of arms of Sienese officials responsible for presenting the Republic’s accounts.

The 18  x 12in (45 x 30.5cm) panel was actually made as a file cover for when the officials left office, and would have been hung on the city walls with the documents attached to the back with a leather strap so that the public could inspect them.

Dated to 1441, the work came to auction from a long-standing German collection and was estimated at £400,000-600,000. But with the artist now believed to be the Sienese master Sano di Pietro, it drew interest from five separate parties including art dealers Robin Katz and Fabrizio Moretti. It was eventually knocked down to the latter who was sitting in the second row of the saleroom and secured it at £1.15m. The sale also offered 10 paintings which had been in the same collection since being purchased almost 200 years ago by the Scottish banker Sir William Forbes, the 7th Baronet of Pitsligo (1773-1827).

The group included a portrait of two boys catalogued as by ‘Titian (c.1485/90-1576) and workshop’. The auctioneers said they believed that Titian had painted “both of the faces” and the catalogue reproduced images of x-rays and infra-red analysis that they said revealed "a very creative process, something that confirms Titian was responsible for the design as well as the painting of the heads".

Estimated at £1m-1.5m, the oil on canvas drew two telephone bidders and was knocked down at £1.75m.

From the same source but selling to a different phone bidder was Portrait of an architect by Lorenzo Lotto (1480-1556) that sold for an above-estimate £340,000. The price was a record for the artist (in sterling).

The top lot of the sale overall was a version of Return from the Kermesse by Pieter Brueghel the Younger (c.1564-1637). The popular composition of the aftermath of a village fete was appearing at auction less than six years after selling at Sotheby’s New York for $4,562,500 (£2.87m) – including premium. 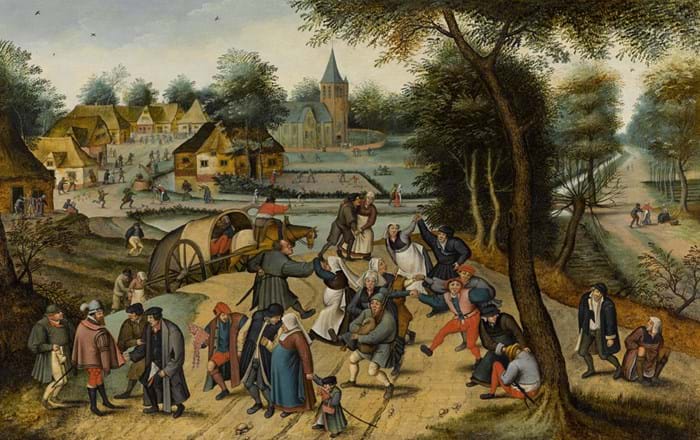 ‘Return from the Kermesse’ by Pieter Brueghel the Younger – £2.15m at Sotheby’s.

Another work by the same artist, a portrait of Erasmus, appears at Christie’s Old Master sale tonight estimated at £40,000-60,000.