Three fairs in Yorkshire this weekend

With the weekend fast approaching, ATG picks three antique and vintage fairs worth visiting if you’re up near the Yorkshire dales over the next two days. This late ‘50s/early ‘60s little black rayon dress is priced at £55 with Caroline Brown, pictured, who runs Rose & Brown Vintage. She will be taking it with her to a fair she is organising this weekend in Keighley.

Caroline Brown runs vintage fairs as Rose & Brown Vintage from her base in Shipley, West Yorkshire.

This weekend, on Saturday and Sunday, May 21-22, her fair is at the Cliffe Castle Museum in Keighley, held in conjunction with Bradford Museums and Galleries.

Set in parkland and gardens and the subject of a major restoration, Cliffe Castle was originally the home of Victorian millionaire and textile magnate, Henry Isaac Butterfield, with the completed house a showpiece in the 1880s of art and French decoration.

Brown is clearly a big fan: “Cliffe Castle is a brilliant museum in such a fantastic setting with its huge chandeliers, William Morris stained glass windows and a vast room full of taxidermy where some of the stalls will sit alongside sculptures, paintings and historical exhibits.”

Top of the must-haves on the fashion list at the moment are original 1940s pieces, now in short supply as “there are plenty of ‘wartime weekends’ held around here and they are taken very seriously”, says Brown. 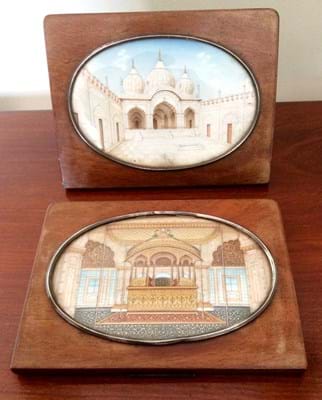 Ben Wray, who owns and manages Bowman Antiques Fairs with his wife Helen Bowman, reports that exhibitor numbers for the antiques and fine art fair at the Great Yorkshire Showground, Harrogate “are running at the 325-335 mark”. The next fair takes place this weekend, Saturday and Sunday, May 21-22.

Among the items on offer is a pair of 19th century framed Indian miniatures handpainted on ivory which will be for sale at £585 with the York dealers Paul and Mary Wood.

The miniatures show the 17th century Pearl Mosque in Delhi’s Red Fort and the idealised copy of the Peacock Throne of the jewelled throne that was the seat of the Mughal emperors of India in Delhi.

Commissioned in the early 17th century by Emperor Shah Jahan, the original throne was taken as a war trophy in 1739 by the Persian king Nader Shah, and remains lost, possibly broken up, to this day. A replacement throne based on the original was commissioned and existed until the Indian Rebellion of 1857. One of the 30-plus stalls at Charlotte Anderson-Hughes’ two-day vintage fair in Leeds.

Organiser Charlotte Anderson-Hughes is expecting a busy of couple of days for her Leeds fundraiser event on Saturday and Sunday, May 21-22.

All 30-plus stalls sold out months ago – and for each of the five annual two-day vintage fairs held in aid of the Leeds cancer charity Gemma’s Hospice she has run for the past 10 years now.

She is hopeful that funds raised for this year’s fairs will top the £20,000 made from these events last year –£106,000 has gone to the hospice since the fairs’ launch in 2006. Anderson-Hughes says: “Each of the charity’s 22 shops in Leeds has a room set aside specifically for fair stock and the standholders are a mix of volunteers as well as dealers and regular fair exhibitors who bring their own pieces to sell.”