The inaugural TEFAF New York closed earlier this week following a six-day run and sales across a number of disciplines. Richard Green Gallery sold this view of Venice by Bernardo Bellotto, which had an asking price of $5m to an American collector.

The event brought 15,000 visitors to The Park Avenue Armory where 94 dealers from around the world exhibited. Representatives from a number of US museums were reported attending, including The Met, the Frick Collection, The Getty, The Detroit Institute of Art and the National Gallery of Art Washington DC.

Managing co-director of the fair Jeff Rabin said that it had “exceeded our highest expectations in every regard”. 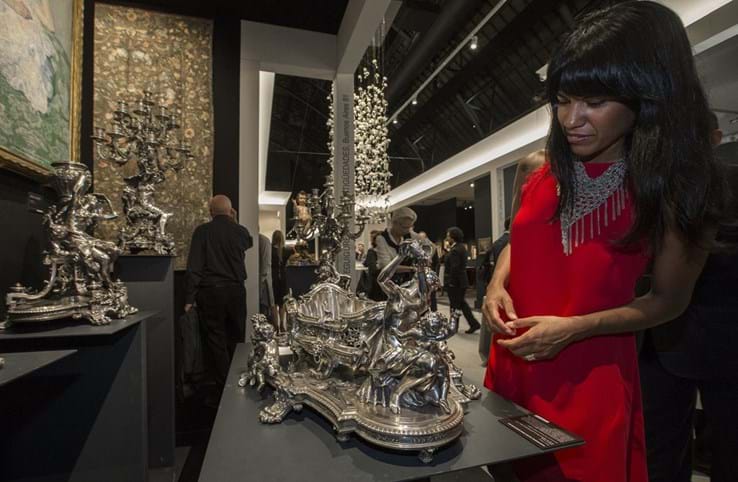 A visitor examines a silver table garniture set from Paris c. 1888 on the stand of Jaime Eguiguren, Arte Y Antiguedades of Argentina.

Sales made after the initial rush at the preview include:

“Americans travel to Europe less these days due to the exposure they feel,” Janssens told ATG before the fair. “It would seem a good time to travel to the US.”

And with many of the reported sales going to US buyers, the fair seems to have effectively targeted that sector of the market. A visitor on the stand of Haboldt Pictura, an Old Master paintings and drawing specialist.

“The inaugural TEFAF fair in New York has been tremendously good to us,” said TEFAF chairman Willem van Roijen. “It has made its mark as a full standalone global even in New York but also provided the perfect window on what to expect at TEFAF Maastricht.

The inaugural TEFAF New York Spring Fair, which focuses on modern and contemporary art and design, takes place May 4-9 and will also be held at the Park Avenue Armory.