A rare American stamp stolen in 1955 in one of the most famous thefts in philatelic history has been recovered after turning up at Spink. 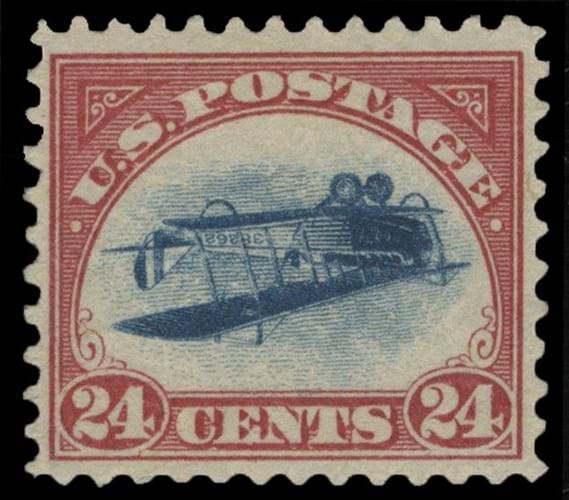 The missing 1918 24c air mail stamp with an ‘Inverted Jenny’ which has been recovered after emerging at Spink.

The long-lost 1918 24c air mail stamp featuring the image of an inverted ‘Jenny’ biplane was given to Spink New York by a prospective consignor who had inherited the stamp. Spink say that once legal matters are settled they will be returning it to its rightful owner, the American Philatelic Research Library.

The stamp was one of a set of 100 red and blue stamps bearing an upside-down image of a Curtiss JN-4H biplane (known as the ‘Jenny’) which were created after a printing mistake. Individual stamps from the set in prime condition have changed hands for almost $1m.

The example that came to Spink was one of a block of four stamps which had been purchased for $16,000 in 1936 by the prominent collector Ethel McCoy from stamp dealer Spencer Anderson. They were her most prized possessions.

The block went missing after it was removed from its exhibition frame during the American Philatelic Society convention in Norfolk, Virginia in 1955.

After the theft, the block was broken into four single stamps and each copy was altered to disguise its appearance. This example had been reperforated at right and most of the gum was removed, so the pencil position numbers written on the gummed side had been lost, making identification very challenging.

George Eveleth, head of the Spink USA’s philatelic department said: “This is one of the most exciting events in my 38-year career in the stamp auction business.”

Only a few ‘Inverted Jenny’ stamps have ever been sold at auction. A number have appeared over the years at philatelic specialists Robert A. Siegel in New York including one that made $525,000 hammer in 2005 and a block of four that fetched $2.7m, also in 2005. Another single example made $850,000 ($977,500 including premium) at the same auction house in November 2007.