The first Chinese firearm with an imperial reign mark ever offered at auction sold at Sotheby’s yesterday for £1.65m. 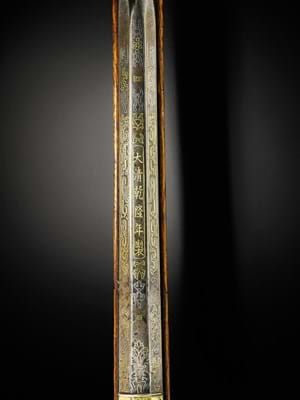 Estimated at £1m-1.5m, it was knocked down to an Asian private collector after a ten-minute bidding battle.

Made in the Chinese Imperial workshops for the Qianlong Emperor, the matchlock musket bears the imperial mark on top of the barrel. It is also incised on the breech of the barrel with four Chinese characters which denote the gun’s peerless ranking – the grading te deng di yi (Supreme Grade, Number One).

The gun is related to six other Qianlong muskets in the collection of the Palace Museum, Beijing although the others have lesser gradings including ‘Supreme Grade, Number Two’ and ‘Top Grade, Number 2’. Together the group of firearms appears to correspond with seven muskets listed in a Qing Dynasty document Collected Statutes of the Qing Dynasty with Illustrations. A detail of the grading marks on the musket denoting its status as ‘te deng di yi’ (Supreme Grade, Number One).

Sotheby’s senior director of Chinese Works of Art in London Robert Bradlow said: “This gun ranks as one of the most significant Chinese treasures ever to come to auction. The result will be remembered alongside landmark sales of other extraordinary objects that epitomise the pinnacle of imperial craftsmanship during the Qing dynasty.”

The musket was likely made for ceremonial use and, as such, its associations with the imperial court gave it significant value to Chinese buyers in addition to its qualities as an exquisitely crafted object.

The Qianlong Emperor, who reigned between 1736-1795, is thought to have hunted with a musket although it is unlikely he ever held a gun in battle.

Before the sale, the auctioneers raised the prospect that it could have been this item that inspired him to write a poem in praise of the accuracy of the musket and his own skill in hunting deer. Sotheby’s also produced a short film with close-up shots of the musket and the actor Wang Gang reciting a poem about hunting in the voice of Emperor Qianlong.