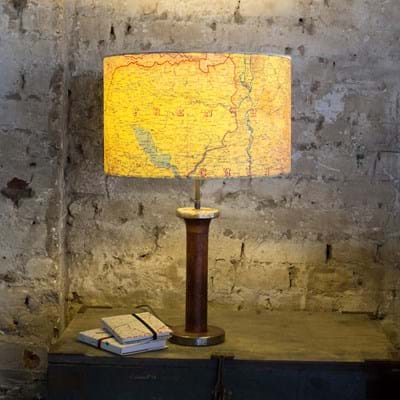 Wedding dresses are mostly traditional in shape and colour but occasionally a bride wants something just a little bit different. When it came to choosing the material for her wedding dress, printmaker Hester Cox unusually plumped for Second World War ‘escape and evade’ maps.

Sara Jane Murray, who stands at the Decorative Living Fair in Kent, repurposes these into designs including cushions, lampshades, pictures, notebooks, jewellery and ties from her farmhouse home in the Yorkshire Dales.

Cox met Murray at a craft fair where the two women were both exhibiting.

Taking up the story, Murray said: “My brief was for a simple summer dress created from maps of Scandinavia, where Hester spends time every year getting inspiration for her work from the landscapes and forests of Sweden. It also had to be a dress in which she could dance the night away.”

On the home front

Murray’s specialist business, Home Front Vintage, started some years ago when she found an original ‘escape and evade’ map at a vintage fair. When she researched the history she discovered these were issued to pilots and Special Forces personnel (see Factfile below).

She then tracked down a whole load being disposed of by a local army barracks.

Murray told ATG that she is constantly sourcing her silk map stock: mainly from military auctions and specialist dealers, although sometimes she is contacted by private collectors.

She added: “This business has a limited lifespan as at some point in the next couple of years I am likely to run out of maps. They are getting harder to source so by the time the UK actually leaves the EU I don’t think I will still be trading!”

- The idea for Second World War escape maps was devised by British intelligence officer Clayton Hutton, known as ‘Clutty’, as an ingenious method for troops to track their way home across Europe if they were escapees or shot down over enemy lines.

- Silk was ideal as it was lightweight and durable, did not degrade in water or rustle and could be folded up small and hidden in jacket lapels and boot heels.

- Hutton approached Bartholomews, the famous Edinburgh mapmaking company, and persuaded them to waive their copyright on the printing of 400,000 silk escape maps for the war effort.