John Wood the Elder’s (1704-54) set of drawing instruments were offered at Clevedon Auction Rooms earlier this month and were bought by the Bath Preservation Trust for £21,000. 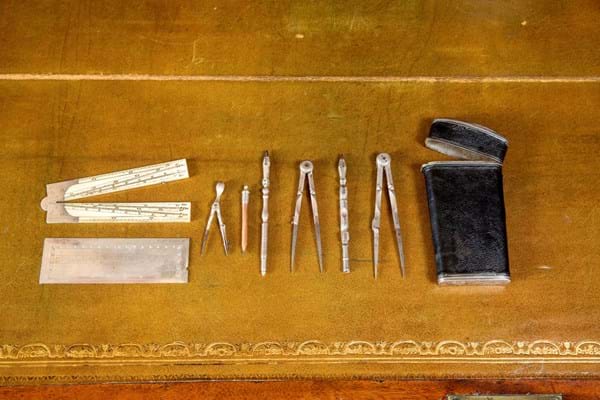 They have already gone on public display in the Museum of Bath Architecture, along with other items describing Wood’s contribution to the design and development of the city.

The set, made c.1745 by the leading architectural instrument maker Thomas Heath of London, is housed in a silver and shagreen case engraved with Wood the Elder’s name in script and his coat of arms. It was discovered in the drawer of a Bristol home – the vendor unaware of the significance of the name, almost lost behind years of tarnish, until it was pointed out at a valuation day. John Wood the Elder’s (1704-54) set of drawing instruments, which were sold to the Bath Preservation Trust at Clevedon Auction Rooms for £21,000.

Dr Amy Frost, architectural curator of Bath Preservation Trust, told ATG: “As soon as we saw the drawing instruments in early January, we knew the most appropriate home for them and commissioned an independent valuation from Duncan Campbell of the Beau Nash gallery.”

Silver specialist Campbell, whose assessment of “£20,000-plus one bid” proved on the money, bid for the trust in the room. His shop is aptly situated on Brock Street in Bath, which runs between The Circus (1764) and the The Royal Crescent (1776), both designed by Wood and completed after his death by his son John Wood the Younger.

Frost added that the museum (making their first purchase at auction) were grateful to the Art Fund, the V&A Purchase Grant Fund and pledges from several local donors “who responded in an amazingly short time so that we could secure the set despite determined bidding from others on the day”.