A still life by American painter Anne Estelle Rice (1877-1959) and a piece of early English furniture are among the top items on offer at Grand Auctions’ upcoming sale on December 12. 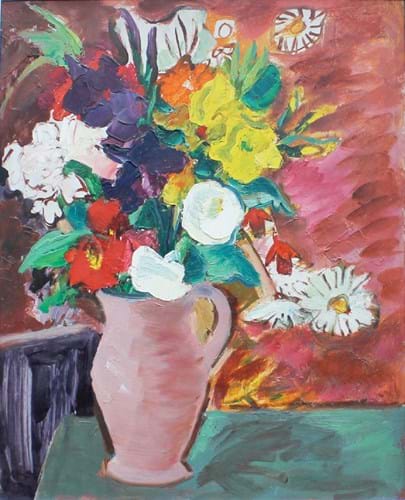 Flowers, an oil on canvas by Anne Estelle Rice which is being offered at Grand Auctions on December 12.

Rice was born in Conchohocken, near Philadelphia but later moved to Europe and set up a studio in Paris. Although associated with better-known Scottish colourists John Duncan Fergusson and Samuel John Peploe, picture specialist at the Folkestone saleroom Jonathan Riley said Rice “still does not receive the critical acclaim she deserves”.

Rice often choose not to sign her paintings but all the pictures in the exhibition were given an ‘AER’ stamp. In addition to the stamp, the example at Grand Auctions had also been signed in ink by Drey himself. Also on offer at the December 12 sale is a walnut and oak bureau which has been dated to the late 17th Century. With six legs united by a stretcher, the auctioneers said it is in good condition and comes with an old label on the underside inscribed in pen ‘Earl of Cavan’.