Thomas Loomes clocks: two come along at once

Two lantern clocks engraved with the signature ‘Thomas Loomes at ye mermayd in Lothbury’ recently appeared at auction within days of each other. 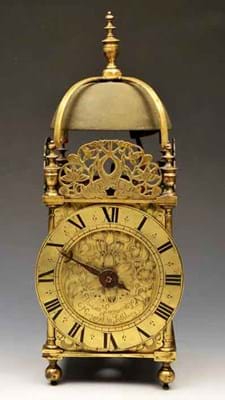 As fewer than 30 timekeepers by the maker are known, it was a remarkable coincidence.

Clocks carrying this evocative signature were made across a relatively short period (1653-65), but Loomes' story - first published last year - is an important one.

A lieutenant in the Trained Bands of the Cromwellian army during the civil wars, sometime in the 1640s he became the journeyman of William Selwood, one of the first generation of English clock makers who worked at the Sign of the Mermaid in Lothbury.

This City street in the parish of St Margaret's, London, was a major centre of lantern clock making in the half a century before the Great Fire. On January 14, 1649 (just days before the English would execute their king), Loomes was made a Brother of the Clockmakers' Company and he assumed control of the business following the death of his master in 1653.

The following year he married Mary, daughter of fellow Anabaptist and clockmaker Ahasuerus Fromanteel - the two men proving powerful allies in their regular disputes with a largely Royalist Clockmakers' Company.

For a decade Loomes operated a second 'City' branch of his father-in-law's empire centred south of the river in Southwark. When Fromanteel took out his famous advert for pendulum clocks in the September 1658 issue of the Mercurius Politicus (the same journal reported the magnificent funeral of Oliver Cromwell), he wrote 'You may have them at his house on the Bankside in Mosses Alley, Southwark, and at the sign of the Maremaid in Loathbury, near Bartholomew lane end, London'.

Loomes' fortunes took a turn for the worse with the Restoration. There was widespread distrust of men of his faith. A marked man, in 1662 he was charged with providing a safehouse to 'the King's enemies' (the bond of £1000 probably paid by Fromanteel) and sometime in 1664 or 1665 he had died in what remain mysterious circumstances.

He was perhaps simply among the one in seven victims of plague but a theory persists he was murdered by Royalists in an act of revenge. The following year the Mermaid workshop, and the entire Lothbury metalworking district, was razed on the third day of the Great Fire.

The example offered by  Henry Adams of Chichester, West Sussex, on April 16 was part of a consignment of material from Norris Castle on the Isle of Wight.

It had not been there all its life (the castle was designed by 18th century architect James Wyatt for Lord Henry Seymour and its original function was entertaining) but it might have been in attic storage there for close to two centuries.

It was heavily tarnished but in the sort of sleepy original condition - untouched by Victorian restoration - that buyers of early clocks so admire. Estimated at just £250-350, it took £6200 (plus 20% buyer's premium).

The 16cm (40cm) high clock seen at  Mallams in Oxford on April 22 was also in generally good condition. The doors and back plates were missing and, like all clocks of this period, it had been converted, early in its life, to an anchor escapement.

The movement carried a 'matchstick man' casting mark. The identity of this brass foundry remains unknown, but castings with this mark are known on clocks made by a range of London makers and periods. It is quite possible he too was from Lothbury, a street that took its name from the loathsome din echoing from the workshops of brass founders, copper smiths and pewterers.

So who now owns these two clocks by Thomas Loomes?

Both sold to the North Yorkshire lantern clock specialist Brian Loomes, a distant relative sharing the same surname, who has been researching the maker for close to 50 years. His 12,000 word articleThe Private Life of Thomas Loomescan be read across three recent issues (May-July 2014) ofClocks Magazine.

Awaiting restoration, both clocks will shortly appear for sale on his website.