Showground fair organisers have reacted with disappointment to the news that exhibitors must pay 20% VAT on pitch rentals. 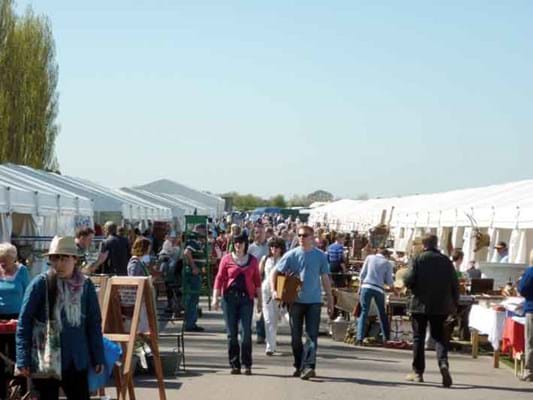 International Antiques and Collectors Fairs (IACF), who challenged Her Majesty's Revenue and Customs on the matter at a three-day tribunal, say they will not appeal the July 15 ruling.

The matter set before the Priory Courts, Birmingham, was whether pitch rentals at showground fairs were VAT exempt on the grounds of them being simply either a 'licence to occupy land' or the 'leasing or letting of immovable property'.

HMRC successfully argued that the pitch leases - while often just a chalk mark in the ground - could not be seen in isolation from any add-on services such as advertising, catering and security that do attract a VAT charge.

Richard Burgoin of Arthur Swallow Fairs told ATG: "We are surprised and disappointed to hear of the outcome of the tribunal between HMRC and IACF. We are currently seeking advice regarding our position and we shall inform our customers in due course."

Not all fair organisers currently charge VAT. It is possible too that organisers will be liable for unpaid tax on pitches dating back to November 2012, when new rules were implemented.

Following the tribunal, IACF chairman Keith Harris was told that it was up to organisers and their advisers to decide whether they owe backdated VAT, not for HMRC to guide them.

Those who decide they are not liable, but later find that they are, will not only have to pay all the backdated VAT, but will also face a fine.

Harris told ATG: "We took this case on not just for ourselves but on behalf of the whole antiques fairs industry and we are disappointed that we lost, but having spent £150,000 on legal fees alone we don't have the appetite to go to appeal."

Changes to the Law

The supply of space at showground fairs was - like stands at a car-boot fair or market - previously exempt from VAT. However the rules changed in November 2012 following EU discussions aimed at reducing the charging of cross-border VAT at international fairs and conferences.

The idea, set out by the HMRC in document RC 22/12, was initially welcomed by the industry until it emerged HMRC intended to apply VAT to pitch rents at events where significant add-on services were being provided by organisers. It effectively put the cost of a stallholder's pitch up by 20%.

IACF and Nelson Events (former organisers of the Alexandra Palace fair) decided to fund a legal challenge to the rules.

ATG chaired a crisis meeting of organisers in London in July 2013 to discuss the matter.

What the Judges Said

The matter set before Judge Peter Kempster and Mr John Coles was whether pitch rentals at showground fairs were VAT exempt on the grounds of them being simply a "licence to occupy land".

The two judges stated that the law - while not clearly written - was on HMRC's side.

"We conclude that the over-arching single supply by the company [IACF] is not to be treated as a supply of a licence to occupy land, but rather a supply of participation as a seller at an expertly organised and expertly run antiques and collectors fair, one element of which is the provision of the pitch.

"Accordingly, the correct VAT treatment of the booking fees is a standard rated supply."