They called him Groovy Bob, “one of the most influential people of the London sixties scene” according to Paul McCartney and immortalised, handcuffed to Mick Jagger inside a police van, by Pop artist Richard Hamilton in the screenprint, Swingeing London 67. 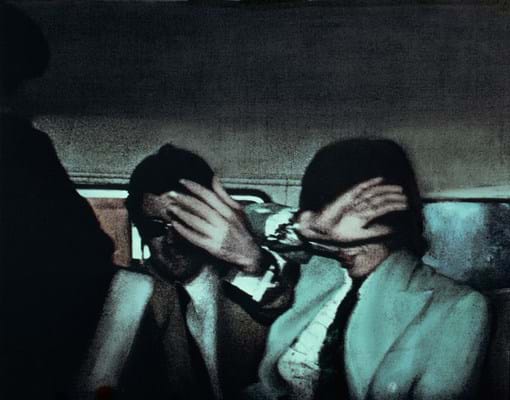 The flamboyant dealer Robert Fraser was one of those legendary art world characters and during the 1960s and '80s his avant-garde London gallery promoted emerging artists from Europe and America.

Fraser's story is celebrated in Pace London's new exhibition, A Strong Sweet Smell of Incense: A Portrait of Robert Fraser, until March 21 at 6 Burlington Gardens, curated by the artist Brian Clarke.

"The idea came about around two years ago after a conversation with Brian, artist and curator of this exhibition" says Mollie Dent-Brocklehurst, Pace London director. "Brian was a close friend of Robert and is also one of many artists who were once represented by the Robert Fraser Gallery (others included Dubuffet, Oldenburg etc now represented by Pace). He told me that he had been entrusted with the Robert Fraser archives, and this event planted the seed to do an exhibition around Robert's career and personality."

The 'lightbulb moment' struck when they realised that Pace founder, Arne Glimcher, was setting up his first gallery in Boston at the time Fraser was opening his own gallery in London. They started to notice parallels between the galleries. "We're exploring our own DNA with this exhibition while paying tribute to one of the most flamboyant dealers and aesthetes. We started listing all the artists we wanted in this exhibition and got really excited," Mollie adds.

The result mixes works that are for sale with loans from institutions around the world and in London, all linked by Fraser - they are pieces he either admired, owned or shown as his gallery, or reflect the cultural background of the gallery, and all the artists included exhibited or had close personal relationships with Fraser. Highlights of the selection include a print of Swingeing London 67 and a portrait of Fraser by Jean-Michel Basquiat, who he represented in the 1980s, alongside documentary photos and a recreation of Fraser's desk based on an Ian MacMillan photograph

Fraser spent much of the 1970s in India with Marianne Faithfull and on his return to London, it was with an exhibition of works by Brian that he reopened his gallery in 1982.

An exhibition of recent stained glass pieces by Brian Clarke, runs at Pace's second gallery at 6-10 Lexington Street until March 21.