More than 60 artefacts stolen from English and Welsh country churches over the past few years have been recovered by police after they were alerted by a collector. 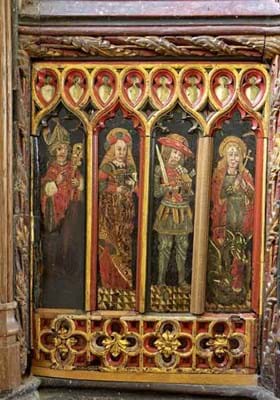 While some items have been returned, the West Mercia force is launching an appeal to trace the owners of the many relics as yet unidentified.

Police have arrested a 50-year-old man from Wales in connection with the series of thefts, which ATG has covered on many occasions to alert the trade. The man was released on bail and is due to be further interviewed on his return to Hereford police station.

Det Con Tony Lewis, based in Hereford, told ATG: "Operation Icarus is a West Mercia-headed investigation into multiple theft offences from churches across England and Wales.

"West Mercia is heading the investigation as we have the highest number of offences on us - eight as it stands today - but I am sure we will have more as items get identified. Other offences have occurred in Breconshire, Monmouthshire, Devon, Suffolk and Kent to name but a few counties.

"Last year a private collector from the south east of England contacted the Met Police Antiques and Antiquities Department. He made due diligence reports to them as he was concerned that he may have bought items which could have been stolen."

The collector recognised items from media coverage of the theft. As a result of his information, the Met recovered a number of items and several of these were traced to thefts in Herefordshire, and Holy Trinity Church at Torbryan in Devon.

DC Lewis added: "In February West Mercia officers attended the address of the original collector in the south east. At that time some 40 exhibits were seized into police control.

"Some of these exhibits are multiple items so we have around 60 plus items safe and secure, being held at a West Mercia police station.

"These were photographed and the hunt was on to try and identify where they had come from and rehome them as soon as possible to their rightful home."

Many of the thefts caused damage to the churches when the works were hacked away, with one of the worst cases being Torbryan, where a pair of 15th century oak panels was ripped out from the rood screen.

The decorative panels, bearing paintings of St Victor of Marseilles and St Margaret of Antioch, are considered of national importance, and were stolen in August, 2013 (reported in ATG No 2104).

The rood screen and its panels are one of only a handful of such artworks in England which survived the Reformation.

DC Lewis said: "West Mercia have sought the help of a number of organisations and individuals who are all working together to identify the items we have recovered. So far we have identified some 21 items - some of which have been returned to their home, including the Torbryan item.

"We are grateful for the assistance of those helping us to identify these items.

"We would ask all church wardens/clergy/parishioners to check their churches to look and see if there are any items missing.

"We believe the offences started in 2011 and will have ended late summer/early autumn 2014.

"Some items are very small and some have been removed from dark corners or high up in walls.

"As such, the thefts may not have been noticed. In some cases attempts have been made to cover a theft, with a different item placed where the stolen item was taken from."

The Churches Conservation Trust, the national charity that cares for 347 unique churches around England including Torbryan church, faces a bill of £7,000 to restore the damage caused by the thieves hacking the panels out of the screen during the theft. The trust has launched a campaign to raise the money.