This memorial design featuring a magnificent peacock resting on a bier and surrounded by myrtle leaves was painted by Sir Edward Coley Burne-Jones in 1886 following the tragic death of Laura Lyttelton, a friend of the artist who died a few days after giving birth to a son. 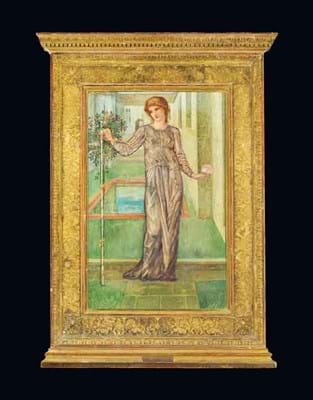 The finished memorial took the form of a sculptural relief but two other painted versions are known - a larger oil and smaller gouache which are both now in the Victoria and Albert Museum.

This version may well have been a preparatory design but the 2ft 11in x 16in (86 x 41cm) bodycolour on gilded gesso was certainly no less poignant. It appeared as part of the of Neil Wilson collection which was offered at Christie's South Kensington on September 4.

The auction itself was a fitting tribute to the late Victorian art specialist who had started his career at CSK before becoming a dealer in 1996. A popular member of the trade who was a familiar face on the fairs circuit, he had an eye for the aesthetic and the auction gave a real flavour of the kind of art with which he was best associated. He died peacefully in June aged 48 after a battle with cancer.

The memorial design was estimated at £20,000-30,000 and drew decent competition before being knocked down to an American private buyer for £26,000.

The sale was led by another Burne-Jones, a watercolour and bodycolour on paper from 1867 entitled The garland which took £55,000 from a UK dealer. Estimated at £20,000-30,000, it was one of six pictures based on his designs for stained glass in the Green Dining Room at the South Kensington (now part of the V&A Museum).

The 2ft 5in x 18in (74 x 46cm) picture came in a handsome tabernacle frame, typical of the type that Agnew's, Burne-Jones's dealers, often gave his pictures in the 1890s.