Prosperity to the County of Cheshire: massive export bowl sells at £43,000

Previously on loan to the Grosvenor Museum, Chester, this unusually large Jiaqing (1796-1820) period export porcelain punch bowl decorated with the Cholmondeley of Vale Royal coat of arms sold for £43,000 at nearby Saltney saleroom Byrne’s this week. 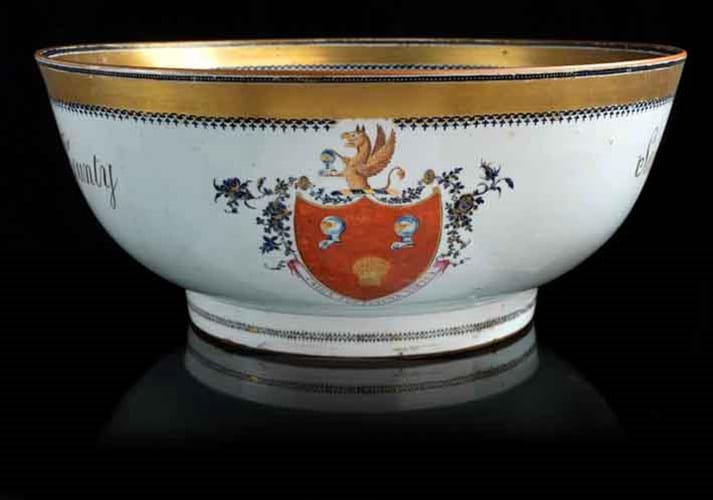 The unusually large Jiaqing-period export porcelain punch bowl decorated with the Cholmondeley of Vale Royal coat of arms that sold for £43,000 at Byrne’s.

Thomas Cholmondeley (1767-1855), second cousin to William Pitt the Younger, continued a long family tradition of participating in political life when he was elected as Member of Parliament for Cheshire in 1796, having also served as High Sheriff for the county in 1792.

Although it is uncertain who commissioned this piece to commemorate his election, they certainly wished Thomas Cholmondeley and his family well, for the mottoes Prosperity to the County of Cheshire and Success to the Plough and the Sail  to the sides, as well as the Chinese symbolism of the pagoda landscape to the interior, were very pertinent to the landowning family at that time.

Measuring an impressive 21in (53cm) diameter, and surviving in excellent condition, the bowl belongs to a small group of bowls of unusually large size marked in script to the base Canton Syngchong (this example also dated Fecit 1797). Although little appears to be known about Syngchong, in his journals Major Samuel Shaw, the first American consul to Canton in 1786, refers to him as "the principal porcelain merchant of Canton".

The buyer's premium was 21%