It was the emergence of the very useful but somewhat hazardous ‘strike anywhere’ match in the 1830s that necessitated the fashion for vesta cases. 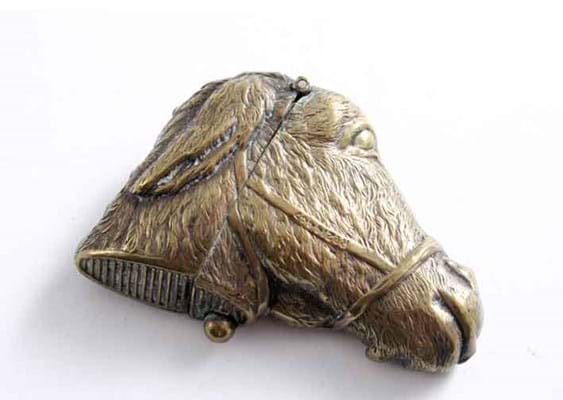 But these small portable 'safes' also came to say much about the status, wealth and personality of their owner.

As part of the essential 'dress code' of the Victorian and Edwardian era they were, like the snuffbox or the propelling pencil, made in a whole range of materials and forms from the purely functional to the deluxe and the novel.

With such huge scope in terms of variety and price levels, vestas are perfect collectables and most regional sales will include one or two.

But the sale of a Welsh private collection at Lawrences of Crewkerne on October 9 was something else entirely and perhaps the largest on record. At 302 lots it required less than three hours of selling time but, as many were multiples comprising up to a dozen or so 'safes', there were comfortably more than 1000 individual items to view.

While the first matches appeared on the market at the end of the Georgian era (the English chemist John Walker marketed a sulphur-tipped splint called a "Congreves "as early as 1827) the heyday of the vesta box were the decades either side of the 20th century.

The vast majority of the 2000 examples here dated from c.1880, when the fashion for cigarette smoking began, and c.1920 when the vestas were superseded by the more durable petrol lighter and the throwaway paper 'matchbook'.

The typical Birmingham-made shaped rectangular silver vesta with a flip-top lid, a ribbed 'strike' on its base, and a link to attach a watch chain was, of course, represented many times in a range of decorative treatments. But it was the number and variety of different forms that made this a special offering and here invention and whimsy counts more than precious metal.

The common man carried his matches in a straightforward box made of tin, gunmetal, brass or vulcanite - perhaps a promotional giveaway advertising a popular brand - and some of these survive in relatively small numbers. Strong sums can be commanded for nickel-plated and celluloid advertising models (averaging out at around £50 each) and for the myriad pressed brass models in forms that ranged from shoes and suitcases to snakes and seashells.

Some of these are relatively common (pigs, violins, crowns, rooster heads and Mr Punch were bought for under £100), while many of the scarcer novelties brought between £150 and 250 each as expected. But it was more of an eye-opener that, in a sale watched by so many collectors from the US in particular, a good handful passed the £500 mark. These included a plated brass Punch and Judy tent (£640) and a donkey's head (£520).

A number of Japanese copper and brass vestas, that combine a European idea with Meiji metalworking skills and traditional subject matter were particularly well received.

These can be a cut above in terms of design and execution and the publication of a book on the subject this year (Japanese Match Safes, Neil Shapiro) has perhaps helped bring this niche field into focus. Certainly estimates were bettered time and again - a brass vesta in the form of a cat with a rat, selling at £550.

As a general rule this was not a selection of the most deluxe English vesta cases - the late 19th century boxes with enamel decoration by Sampson Mordan & Co. There were, for example, none of the series modelled as sentry boxes occupied by variously enamelled guards or those enamelled with Victorian golfers or hunting scenes.

Budget had doubtless been a factor: for a good many years these have sold for £1500-5000. However, there were some handsome silver examples, such as that in the form of a Noh mask by Louis Emmanuel, Birmingham, 1887 (£480) or a Continental box as a car radiator with import marks for London 1913 (£640).

The financial highlight of the collection was provided by an Edwardian silver and enamel box (JWB, Birmingham, 1909) decorated with the full range of yachting pennant signals that improved upon its £300-400 estimate to bring £1750.

Some of these commanded interest from several collecting quarters, as do the 'combination' vestas, that include apertures for sovereigns, stamps and the like, or the patents models that offered new and ingenious ways of lighting a match.

Among the most eagerly contested items in this sub-category was an Edwardian box with a 'purse'-type closure that opened to reveal six 'fanning' double match holders. Marked for Albert Barker, London 1902, it took £520.

Highlights from the £75,000 collection are pictured here.