Bought at a car boot sale in the Portsmouth area earlier this year for just 40p each, these three opaque twist wine glasses decorated by the Beilby workshop of Newcastle upon Tyne c.1765 sold for £16,000 at the latest sale held by Stride and Son of Chichester. 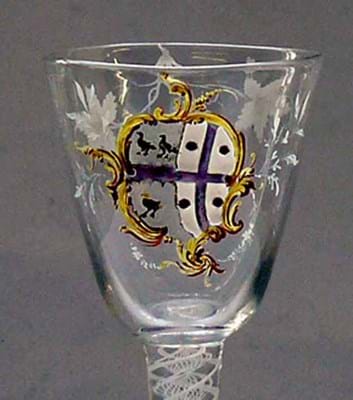 At the auction on June 24, four telephone bidders and more on the saleroom floor contested this sparsely catalogued lot before it was won by a well-known specialist dealer.

Fewer than 100 Beilby armorial glasses have been documented. The arms on this trio, Thomas impaling Clayton painted in yellow heightened in iron-red, black, white and gilt, are those of John Thomas (1712-1793), a career churchman from Cumberland.

Educated at Carlisle grammar school and at Queen's College, Oxford, John Thomas became chaplain in ordinary to George II in 1749 (a post he retained under George III) and Bishop of Rochester in 1774. At the time these glasses were commissioned, Thomas was vicar of St Bride's on London's Fleet Street - adding credence to the latest research suggesting William and Thomas Beilby were marketing their luxury wares via an agent in the capital.

Two matching glasses with this armorial were known before the recent discovery, bringing the set to five. One, sold at Christie's in October 1990 for £8500, is now in the Durrington collection. Another, sold by Sotheby's from the collection of the Takayama Museum of Art in 1993 (£8500) and again from a private collection in 2002 (£8000), was sold by Bonhams last year as part of the Chris Crabtree collection for £9000.

Remarkably, this is not the only Beilby car boot find of recent years. A set of four waisted tumblers or firing glasses with polychrome Masonic decoration dated 1768, bought for 25p each at a boot sale in Brighton in 2005, was sold by Christie's South Kensington in July that year for £18,000 (plus 20 per cent buyer's premium).

The set has subsequently been split (collectors tend to want to own just one example) and single tumblers have been sold by Bonhams.

The buyer's premium was 15 per cent premium.