SOTHEBY’S Hong Kong spring sales series of classical, modern and contemporary Asian art, wine, jewellery and watches from April 4 to 8 were not as financially rewarding for the firm as in recent times. 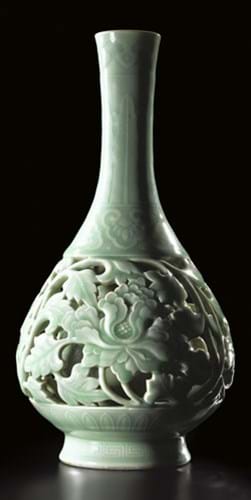 The star of Sotheby’s Hong Kong spring series was this Qianlong mark and period celadon vase at HK$42m (£3.6m).

The premium-inclusive HK$691m (£60.1m) total for this nine-auction series was a significant fall from the HK$1.1bn and HK$1.77bn tallies in autumn and spring 2008 respectively. Superficially the series looked slightly larger at 1805 lots compared with1700 and 1690 for the two previous series, but almost half - 750 lots - were an inaugural wine sale which contributed HK$49.9m.

But the latest Hong Kong series had its high points, with two 'white glove' auctions and a healthy overall selling rate by lot of 85 per cent thanks to more streamlined sales and greater selectivity at the point of consignment.

A major contributory factor to the decline in takings was the reluctance on the part of some private vendors of imperial ceramics and works of art to consign major fresh-to-market works, given the uncertain economic climate.

But for vendors of top-end, fresh-to-market imperial Chinese ceramics brave enough to consign, the rewards were there to be reaped. Nowhere was this more evident than in the week's jewel in the crown: a single-owner collection of Yongzheng (1723-35) and Qianlong (1736-95) Imperial porcelain of impeccable quality, condition and provenance, assembled in Europe in the 1960s, that fielded no casualties and brought HK$95.5m (£8.3m).

The sale, billed as Eight Treasures from a European collection, was rumoured in the trade to be the personal collection of the highly respected London dealer and Chinese porcelain connoisseur Richard Marchant. A number of the pieces had been used to illustrate Mr Marchant's Oriental Ceramic Society of Hong Kong lectures in the 1970s.

The standout entry was the mark and period Qianlong reticulated celadon vase, pictured here, sold to a private buyer at HK$42m (£3.6m).

This assemblage attracted interest from major US, European and Asian private buyers and dealers and reflected continued hunger for top-end porcelain.

This demand was also seen for the best porcelain in the 54-lot mixed-vendor ceramics and works of art sale on April 8 where mainland Chinese buyers fuelled prices for mid-range Imperial porcelain.

However, buyers were indifferent to the works of art offered in this HK$64.3m (£5.6m) premium-inclusive outing and this section fielded many of the casualties capping the overall take-up rate at 56 per cent by lot. Similarly, there was little enthusiasm for the Ming dynasty Imperial lacquer furniture from the Biegucang collection that totalled HK$18.5m (£1.6m) on April 8. All bar three of the eight lots were bought in.

Ceramics and works of art aside, the series was notable for the firm's inaugural Hong Kong wine auction on April 4 that was a sell-out, netting a premium-inclusive HK$49.9m (£4.3m) for 750 lots.

This included the sale's star turn: a large oil on canvas by Lin Fengmian (1900-1991), entitled Fishing Harvest and acquired by the Danish ambassador in Beijing directly from the artist in the 1960s. It doubled the previous record for this artist, selling at HK$14m (£1.2m), proving once again the winning combination of quality, rarity and provenance.