It was in 1908 that the American entrepreneur Charles Barnes convinced the British Columbia Development Association (BCDA), a London-based investment syndicate, to purchase 6000 acres of land to establish a farming community for British settlers next to the Thompson River. 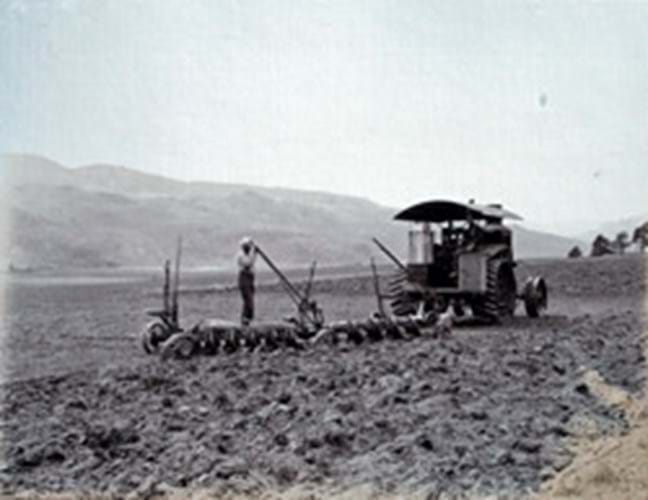 The album of photos that sold at £1500 showed the building of the Walhachin agricultural colony in British Columbia, including the breaking of new land for an orchard shown here.

Walhachin officially 'opened' for business in 1910.

It was, said the newspaper ads and glossy brochures, "the ideal place for men of a better class". In the place the Thompson Indians called 'bountiful valley' (it translates as 'land of the round rock') the company promised to build houses and manage ready-made estates for a modest fee so that "people of education and refinement" could enjoy the fruits of the soil and their leisure in the New World.

A life of tennis, cricket, polo, fancy dress parties, theatre productions and paid servants from the nearby Chinese or native communities beckoned.

But by 1914 this experimental horticultural colony had attracted only 300 of these affluent settlers - mainly bachelors and retired army officers - and the start of the Great War would spell the beginning of a speedy end for the colony. As many inhabitants returned to England to enlist, Walhachin became financially unviable and by 1922 was nothing but a ghost town.

A rare reminder of the fleeting community in B.C.'s Gold Country surfaced at Lincoln auctioneers Thomas Mawer on March 1. An album of over 50 black and white photos relating to the Walhachin project was consigned for sale by a local vendor who had been given it by an octogenarian named Mrs Wilkinson, for whom he worked as a painter and decorator in Hertfordshire 30 years ago. Mrs Wilkinson, it emerged, happened to be the sister of C.E. Barnes.

The album (only a handful are thought to have been made) includes many evocative images, including the planting of orchards, the building of houses and town buildings plus the construction of a complicated irrigation system. The desert terrain in the interior of the province wasn't easily conquerable, but a team of engineers constructed a series of elaborate canal systems and wooden flumes to carry water to higher ground for irrigation from Bull Lake reservoir.

The vendor was hoping the album might generate £2000-3000 (towards the purchase of an engagement ring), although the market for such things is surely very small. In the event a London dealer, acting on behalf of a collector who, it is believed, is from British Columbia, was able to buy it on its reserve of £1500 plus 15% premium.