Contemporary sales bring home the Bacon after a nasty shock 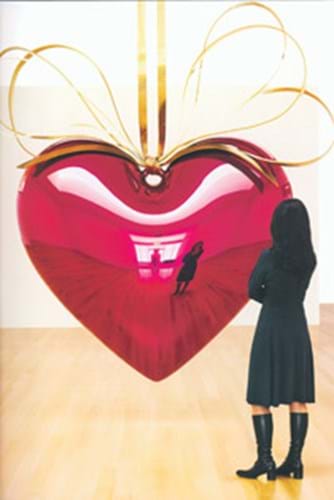 Jeff Koon’s monumental stainless steel sculpture Hanging Heart (Magenta/Gold) set a new auction record for any work of art by a living artist when it sold to New York and London dealer Larry Gagosian for $21m (£10.5m) at Sotheby’s.

A nervous international art market breathed a collective sigh of relief last week after a make-or-break series of contemporary auctions at Sotheby's and Christie's New York both achieved record highs.

All but five of the 66 lots at Christie's evening sale of Post-War and Contemporary art on November 13 found buyers. The premium-inclusive total of $325m (£162.5m), achieved against an estimate of $271m-373m, made it the second highest grossing auction Christie's have held in this category.

Mark Rothko's 1955 abstract, Untitled (Red, Blue, Orange) topped the sale with a telephone bid of $30.5m (£15.25m), just above the upper estimate, while Jeff Koons' stainless steel Diamond (Blue) sculpture was knocked down for a record $10.5m (£5.25m) to dealer Larry Gagosian, who originally sold the piece to Christie's vendor. Both works had been guaranteed, the Koons with an estimate of $12m.

Reassured by the success of Christie's sale - which many viewed as the 'riskier' offering - bidders were even more confident at Sotheby's the following evening.

The sale was led by the record $41m (£20.5m) paid by New York agent Philippe Ségalot, on behalf of an American client, for Francis Bacon's 1969 canvas, Second Version of Study for Bullfight No.1, estimated at "in excess of $35m".

But arguably an even more important result for confidence levels in the contemporary market was the $21m (£10.5m) paid by Larry Gagosian for Jeff Koons' hefty - and heftily guaranteed - stainless steel sculpture, Hanging Heart (Magenta/Gold), estimated at $15m-20m.

It is not clear whether Mr Gagosian was buying for stock or for a client.

Sotheby's record result bolstered the company's share price. The previous week, following the high-profile failure of a guaranteed $28m-35m Van Gogh, Sotheby's share price slumped 36 per cent to $32.75. The day after Sotheby's contemporary sale it had recovered to $38.27.

After Sotheby's historic $315m sale a visibly relieved auctioneer Tobias Meyer commented: "Tonight's results are evidence of the hunger that exists across a global community of buyers for contemporary art of the highest quality."

Contrary to what many commentators and analysts expected and predicted, the contemporary art market 'bubble' continues to prove remarkably resilient.