All Bank of England banknotes issued prior to the early 1800s are rare but the note, pictured here, dated 30 August 1705, is believed to be the oldest in private hands. 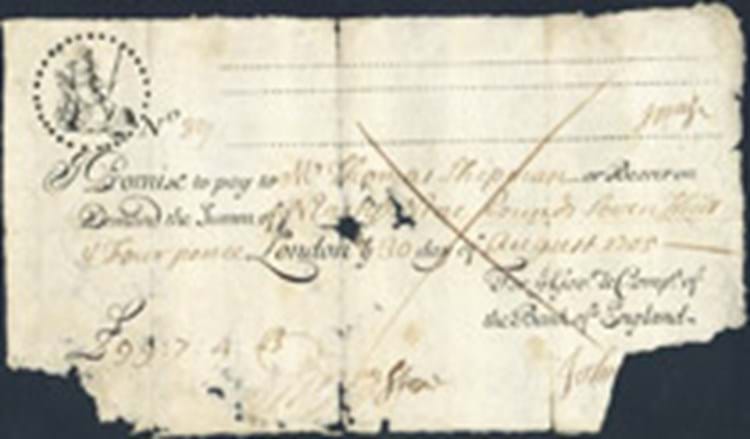 Printed in black on watermarked paper with an ornate vignette of Britannia surrounded by a border of 32 stars in the top lefthand corner, the 8 x 41/2in (20 x 11.5cm) note is made payable to Mr Thomas Shipman (about whom no information was gleaned) or the bearer for the amount of 99 pounds, seven shillings and four pence.

The note is one of the last of this type, in 1707 the design was altered and in 1725 denominations were printed for fixed amounts.

Although there is a small hole at the centre (possibly due to spiking at the bank) and the signature has been torn off (for cancellation), the fabric of the note is still strong and the print detail fresh.

Founded in 1694, almost immediately the Bank of England started to issue notes in return for deposits. Like the promissory notes issued in the previous century by goldsmith-bankers, the crucial feature that made Bank of England notes a means of exchange was the promise to pay the bearer the sum of the note on demand in either gold or coinage.