The history of British tiles reflects both the fashions of interior and exterior decoration, as well as the development of British ceramics manufacture. 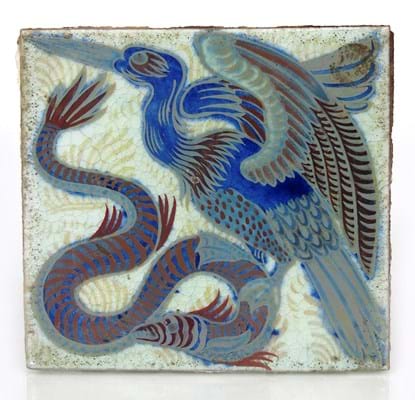 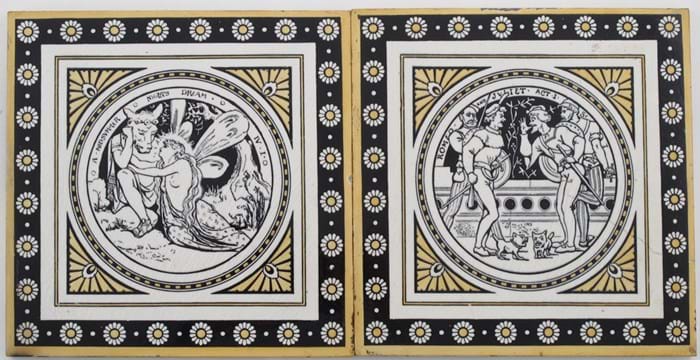 From the encaustic tiles made during the first flowering of medieval tile production in the 13th century, to the tin-glazed earthenware or delftware tiles popular in the Stuart and the Georgian periods, the British tiles industry was already centuries old when mechanisation in the 19th century saw tiles produced in greater numbers and greater variety than ever before.

Once the preserve of architectural historians keen to salvage fragments of architectural heritage, antique tiles have been rediscovered by collectors for their ease of display, decorative appeal and affordability.

The majority of old tiles encountered today are products of the Industrial Revolution - tin-glazed earthenware tiles from the delft-producing centres of the mid 18th century and dust-pressed tiles from the Victorian and Edwardian periods.

Dust-pressing, the compacting of powdered clay in a hand- or steam-operated press, facilitated a revolution in tile production when invented by the engineer Richard Prosser in 1840. Quickly exploited by the Staffordshire potter Herbert Minton, who bought a share of the patent, the method was quicker and more efficient than tiles made in 'plastic' clay and created a uniform product with a perfectly smooth surface unlikely to shrink or warp during firing. 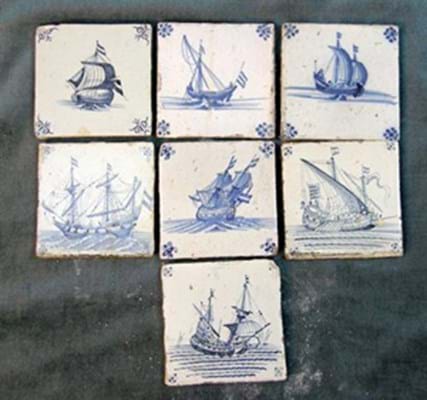 Transfer printing, first seen on the delftware tiles made by John Sadler in Liverpool in the 1750s, allowed for the easy repetition of designs that embraced the full range of Victorian and Edwardian fashions from naturalism and japonism to classicism and historicism. For reasons of hygiene and decoration, they adorned porches, bathrooms, butcher's shops and fishmongers, or were set in fireplaces and picture frames or in occasional furniture from table tops and wash stands to jardinières and coat stands.

At the same time medieval encaustic floor tiles, the hard-wearing, two-coloured clay tiles with a lead glaze that neo-gothic architects admired in some of the nation's most venerable buildings, were also a source of inspiration. From the 1840s Minton & Co, Maw & Co, Godwin, Campbell Tiles, and Craven Dunnill were amongst the foremost manufacturers of encaustic tiles made in a range of patterns, colours and figurative designs for use in all manner of ecclesiastical, public and domestic buildings.

So large is the range that many enthusiasts will opt to narrow their field of vision - choosing to collect, for example, by factory, subject or designer. Victorian tiles by major manufacturers are often marked on the back with design registration lozenges or the name and place of manufacture. 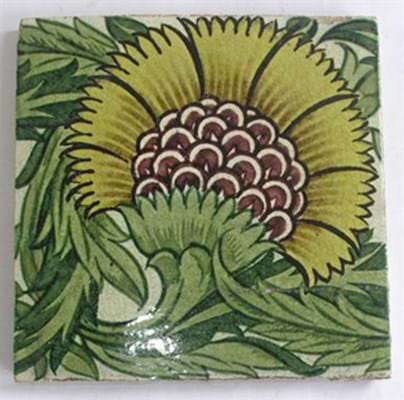 More likely to remain anonymous are the actual designers who typically worked in the Potteries on a freelance basis. Nevertheless, many key names of the period have been identified. At Minton alone these include A.W.N. Pugin, Dr Christopher Dresser, William Wise, Walter Crane and Moyr Smith.

The latter, active at Minton between 1882 and 1889, produced many sets of (typically 12) tiles on themes such as the Waverley novels, the seasons, the months of the year, Shakespearean characters, Aesop's Fables and the Old and New Testaments.

Mechanically produced tiles contrast with those made at the end of the century by adherents to the Arts and Crafts movement. At the London workshops of Morris & Co. and the art potter William De Morgan, dust-pressing and transfer printing were eschewed in favour of a return to more traditional manufacturing methods.

Intimately involved at all levels of the design and production process, De Morgan also experimented with lustre decoration. This was achieved by introducing metallic elements into the glaze and became the hallmark of the turn-of-the-century wares made at the Pilkingtons factory in Lancaster.

Hand decoration was a feature of both the tube-lined Art Nouveau tiles popular in the first decade of the 20th century and the singular Art Deco-influenced productions made by the Carter factory in Poole.

Good examples of all these products are on view at the Jackfield Tile Museum in Shropshire, housed in the former works of Craven Dunnill and Co. and close to the site of the Maw & Co. factory. The museum, an almost complete Victorian tile factory where encaustic tiles are again being made, is presently nearing the end of a comprehensive restoration programme.

As a general rule old tiles are numerous enough to remain relatively cheap to buy.

Thankfully no longer destined for landfill, those from the Victorian and Edwardian periods, the heyday of British ceramics manufacturing, are still freely available at antique fairs, fleamarkets, junk shops and  architectural salvage firms.

Given their relatively portable nature and the ease of identification, tiles have proved perfect internet collectables and tiles of all types can be viewed in quantity on eBay.

The market is governed by decorative rather than practical appeal. Here many anonymous Victorian transfer-printed tiles decorated with standard floral designs or geometric patterns are still sold for under £10 each (even some by major makers such as Minton and Wedgwood), but better examples now command closer to £20 and those with the most appealing designs by recognised artists can be considerably more. It is not unusual for the instantly recognisable Minton tiles carrying the linear designs of Moyr Smith or Walter Crane to bring three-figure sums, particularly when the subject matter chimes with the collecting audience. Nursery scenes are among the most desirable (those with religious subject matter less so) while complete sets will command a premium over and above the sum of 12 individual tiles.

More rarefied wares from the period will be sold by dealers or auctioneers specialising in British art pottery.

Tiles designed by the Dresser workshop have a dedicated following outside of the tile collecting community (and here prices can exceed four figures), while at the very top of the scale are the rare Burne-Jones designed tiles by Morris & Co or the singular creations of William De Morgan. Both are micro markets on their own.

Even entry level floral-patterned pieces by De Morgan begin at around £100 and prices rise quickly into four figures for multi-tile galleon panels or the iconic 5in (13cm) square tiles worked in lustre colours with animals and birds, real or imagined.

The appearance on the market in recent times of several important collections has yet to wholly satisfy demand. A record for a single William De Morgan tile was set by Woolley & Wallis of Salisbury in 2012 when a rare lustre kingfisher tile sold at £5100. It was then bettered at the same saleroom in December 2013 when a Sands End period tile painted in shades of blue and green with a pair of chameleons took £7200.

Tiles from the 13th to the 18th century typically form part of the English pottery market. Complete medieval lead-glazed encaustic tiles come to market infrequently, although they are occasionally available from specialist English pottery dealers. Small fragments, often found by mudlarks on the Thames, are easier to come by for a few pounds on eBay.

So numerous are 18th century Dutch delft tiles, made in vast quantities for export all over the world, that examples with standard landscape motifs or biblical subjects can be bought for under £30 each and it is a finely-painted example (or one with a particularly appealing subject matter, be it an animal or a sportsman) that brings over £100.

English delft tiles, made in a number of centres including London, Liverpool and Bristol, are generally scarcer and more desirable - although again most monochrome tiles with small faults can be bought for two-figure sums.

More expensive are tiles from the late 17th century series detailing the story of the Popish Plot or the colourful 'Fazackerly' wares and the 'overglaze' transfer printed tiles by Sadler and Green, both made in Liverpool in the second half of the 18th century. Rococo pastoral scenes were Sadler's stock in trade but his well-known range of printed tiles depicting famous actors and actresses of the period are great social history and among the most coveted of all.

The Decorative Tile in Architecture and Interiors by Tony Herbert and Kathryn Huggins, Phaidon Press, ISBN 10: 0714831611.

Royalists muster for a Sunday in Kensington

A tile worth taking a Gamble on