Lalique glass has long been a world-famous brand, internationally admired and still in production today under Swiss ownership. But for René Lalique, it represented a second commercially successful career. 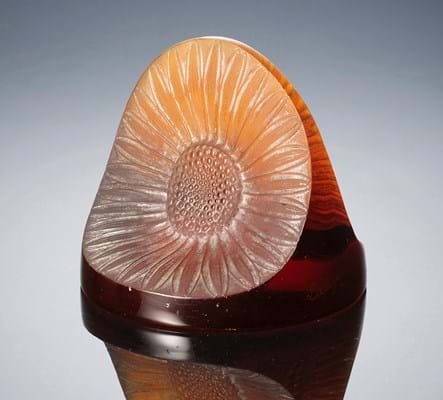 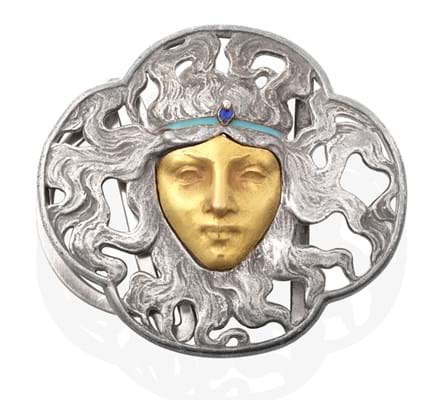 Born in the Champagne region of France in 1860, by the turn of the 20th century he had already proved himself a highly creative artist jeweller producing the distinctive Art Nouveau designs that won fame and admirers for their ground-breaking use of non precious materials like horn and glass.

But as the fashion for Art Nouveau peaked, Lalique moved on. The first decade of the new century saw him produce glass bottles for François Coty and other perfumiers from a small atelier. These modest experiments in branded packaging led in 1913 to a factory at Combs- La-Ville in south east of Paris where he began the mass production of the vases, ornaments, car mascots and light and architectural fittings for which the Lalique firm is now so well known. The La Jour et La Nuit (Day and Night) timepiece was one of Lalique’s most expensive models when it was created in 1926 and fewer than 30 examples are known to exist. This example is in the rarer blue colourway, stands 14.75in (37.5cm) high, and has an R Lalique stencilled mark. It fetched £78,000 at Sotheby’s in November 2010.

After the Great War production expanded in 1921 to a much larger factory at Wingen-Sur-Moder in Alsace, the newly regained region which had an established reputation for producing French art glass.

René Lalique's products, made by means of a combination of mould and blown methods and in a variety of different finishes, embraced both the clean lines of the new geometric style at the expense of the sinuous curves of the 1900 style and the new power of electric light. By the time of the landmark 1925 Exposition des Arts Decoratifs, the Paris trade show that gave Art Deco its name, Lalique was a well known name and a key participant. As well as his own impressive stand, he designed decor for other exhibitors and a mammoth glass fountain for the showground.

The late 1920s and 30s saw Lalique take on a number of major architectural and interior decorating projects including chapels in France and Jersey, the Orient Express train and the ocean liner SS Normandie.

During World War II the Alsace factory was damaged and production halted but resumed again after the war (and René's death in 1945) under his son Marc Lalique who oversaw the opening of a renovated building in 1951. He also changed the composition of the glass, renamed Lalique Cristal, which has a lower lead content.

There are many categories of Lalique to collect: perfume bottles, vases and table ornaments, small boxes, drinking glasses, a wide variety of light fittings, car mascots and, at a more limited level, architectural elements.

Some of these have a broader crossover appeal like the car mascots, which attract motoring enthusiasts, or perfume bottles which appeal to scent bottle collectors.

Many of Lalique's designs were originally created in the 1920s but proved enduring with large and long production runs (Lalique's Bacchantes vase designed back in 1927 is still being produced today). Many designs with evocative names like Tourbillons (whirlwinds), Formose ( goldfish) or Ceylan (budgerigars) also appeared in a variety of different colours with surface finishes ranging from opalescent to enamelled, stained, polished and acid-etched. 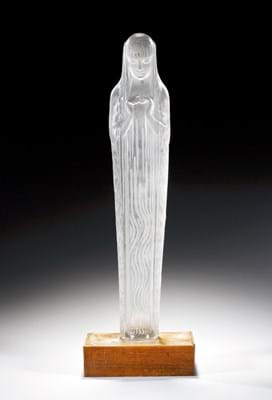 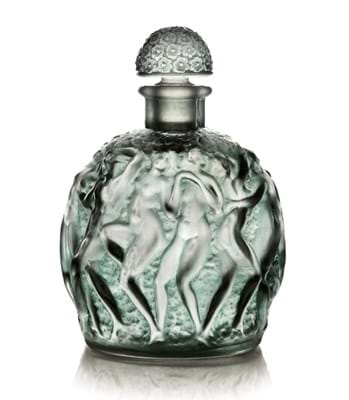 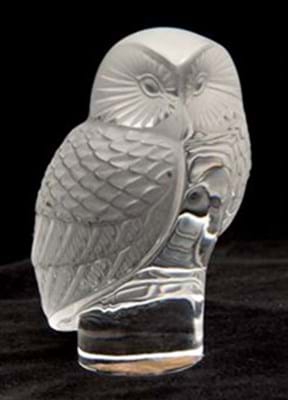 There is also plenty of scope for collecting Lalique from a more recent vintage. For example, a 3.5in (9cm) high clear and frosted glass owl paperweight etched Lalique France to the base (a form of mark used after the War) probably dates from the 1970s. It made £100 at Mallams Oxford in December 2010.

Its worldwide reputation as luxury giftware long reinforced by showrooms in major cities, Lalique has never completely gone out of fashion. Nor has it ever been cheap.

However, it wasn't really until the 1960s when academics, dealers and collectors started to get interested in Art Nouveau and Deco as stylistic movements that vintage Lalique began to acquire a collector's status and value. Demand for period Lalique has now been with us for decades and it is a truly international market with collectors across Europe, Asia, the Americas and the Antipodes.

Nonetheless, there have been peaks and troughs in the market.

Fuelled in part by Japanese demand, prices were very high in the 1980s and '90s. But Far Eastern demand fell away towards the end of the 20th century and the specialist Lalique auctions, pioneered in the late 1970s in the US and a regular feature in London by the 1980s, dropped out of the frame.

But prices have been rising again since 2000 and with it the specialist sale has returned. In London they are currently held at Bonhams while Heritage mount an annual auction in New York.

The Reynard/Fox mascot (model No.1182) is among the rarest of all the Art Deco car mascots produced by René Lalique. This example came up for sale at Wiederseim Associates of Chester Springs, Pennsylvania in November 2011 and sold for $175,000 (£119,000).

The most expensive pieces of Lalique tend to be René Lalique's cire perdue works – unique creations cast by the lost wax process that necessitates that the mould is broken in use. Understandably, cire perdue Lalique exists in very small numbers.

Beyond this, values are linked to scarcity determined by such factors as length of production, colours, special finishes, subject matter and the crispness of the moulding.

The amount of coloured Lalique is much smaller than clear. An opalescent finish is seen as more desirable than a monochrome version and figural subjects tend to be most popular.

Condition is paramount in Lalique collecting. Chips and cracks will severely reduce the value.

Occasionally elements of the interior decorating commissions undertaken by Lalique come onto the market and these rarities make very substantial sums, like his glass panels for the dining car of the Cote D'Azur Pullman Express sold in Paris by Christie's in 2011 or the Moineaux (Sparrows) glass doors created for the dining room of Channel Islands patron Lady Trent, which realised €1.75m (£1.59m) in Sotheby's Paris rooms in November 2011.

At the other end of the scale, tablewares, especially plates, dishes, small ashtrays or glasses that were produced in large numbers are still available for relatively little outlay. As a general rule, post-War Lalique is less expensive that the pre-War pieces, with pieces by the factory's modern incarnation Lalique Cristal selling for a fraction of their retail prices on the secondary market.

Dating and identification of Lalique is complex. The Lalique glass trademark can be moulded, engraved, etched or stencilled and takes various forms. There are some generalisations on dating such as the cessation of the 'R' in front of Lalique following René's death but even this is not completely hard and fast. In short, familiarity with the product and specialist knowledge is required to date a piece accurately.