The early 1780s witnessed the emergence of the professional caricaturist and the satirical print as a force in urban culture. It was a uniquely British phenomenon as only in Britain did the necessary conditions – freedom of expression, party politics and a receptive market – combine. 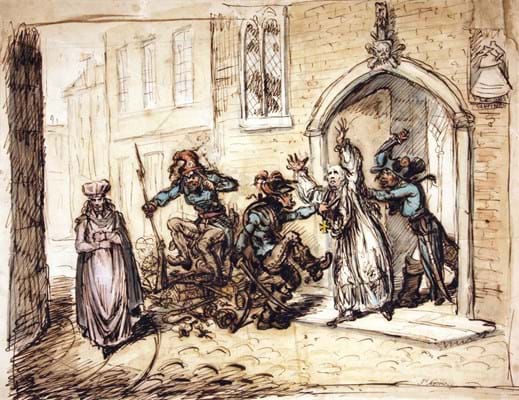 The years between the loss of the American colonies and George IV’s death in 1830 were the golden age for single-sheet political caricatures – bracketing the careers of two giants of the genre, James Gillray (1756-1815) and Thomas Rowlandson (1757-1827).

Both were brilliant draughtsmen, hugely inventive and with a rapier wit.

The legacy of Gillray’s work in particular – the subject of exhibitions in 2015 at the Ashmolean in Oxford and London’s Cartoon Museum marking 200 years of his death – inspired the likes of Goya and David and continues to influence satirical cartoonists all over the world.

Then, as now, there were rich pickings for ridicule. In Parliament, Tory William Pitt the Younger battled for supremacy with Charles James Fox, Edmund Burke and Richard Sheridan for the Whigs. In the palace, George III’s madness was public knowledge as were George IV’s various affairs, extravagant lifestyle and political meddling.

Domestic issues such as Catholic Emancipation and political reform weighed heavily – and all in the shadow of the French Revolution. The brilliance of the genre was its ability to quickly crystallise topical events or ideas in the language of the street as well as the drawing room. The core technique was copper plate etching, a fast, fluid medium that allowed a response to events within days.

Cartoons could then be printed in small runs of 500 copies or less to be sold for a few shillings each (more for those in colour) from the premises of specialist print sellers.

Although beyond the pocket of the working man, a salacious print displayed in a shop window – or pinned to the wall of a coffee shop or tavern – was guaranteed to attract a crowd. It is no surprise that some authors preferred to keep some of their more challenging work anonymous.

The vitriol and vulgarity of Georgian imagery – that largely disappeared with the arrival of prim and proper Victorian sensibilities – still has the power to amuse, engage and even shock today. In an otherwise soft market for 18th and 19th century prints, there is a strong following for political caricatures on both English-speaking sides of the Atlantic.

Prices have risen consistently since the 1980s when Georgian cartoons, still stuck in the limbo between political history and art history, might cost £30-50 each or £200 for a popular image. Nowadays the best and rarest examples can easily fetch over £1000.

A subtle change in the way they were sold at auction – introduced shortly after the influential Gillray exhibition at the Tate Gallery in 2001 – certainly impacted prices. The move from job lots and albums to properly catalogued single items allowed collectors, connoisseurs and institutions to compete in a forum previously dominated by bulk-buying dealers.

Previously there were few easily available price levels with which to make comparisons. Now there are many.

According to specialist London dealer Andrew Edmunds, the two decades since the advent of ‘single’ satire sales have seen retail prices in the saleroom. Some lots lightly regarded by connoisseurs have achieved extraordinary prices, he says.

Like all dealers he is always on the look-out for prints pasted into old scrap albums because (while margins are sometimes trimmed) here the original colour is preserved. Otherwise, in the knowledge that most 18th century prints were originally sold ‘plain’ with hand colouring available for twice the price, he would prefer to own a good uncoloured impression than a print with modern colour.

What do People Collect?

If there is a hierarchy of caricature artists – a list that alongside Gillray and Rowlandson includes George Cruikshank, George Moutard Woodward, William Heath, Henry William Bunbury and Richard Newton – then some subjects and some impressions are more popular than others.

Bloomsbury Auctions’ specialist Robert Hall observes that collectors favour the Fox-Pitt and the Napoleonic eras above all – enjoying the depth, symbolism and range of references that the best satirical cartoons have to offer.

Social satires, the mainstay for many publishers of the time, are less popular and Hall observes a noticeable drop in prices for prints post-dating 1815. It seems Napoleon still exerts a powerful hold on the British psyche.

A copy of James Gillray’s ‘The Grand Coronation Procession of Napoleone the 1st, Emperor of France...’ of 1805 which sold for £2600 at Bloomsbury Auctions in July 2017. Second from left is the gross figure of Joseph Fouché, Intendant General of Police, and just to the right of Napoleon are seen Pope Pius VII and the Emperor’s Prime Minister & King of Arms, Talleyrand, preceded by his fearsome looking wife.

The most desirable impressions are those printed closest to the date indicated in the publisher’s imprint – clues can be found in the paper, lettering and other markings (or absence thereof) – and those that survive in original condition. Many prints were later coloured and trimmed for framing or pasting into albums. This impacts value, though the most desirable images are saleable even if not in ‘tip top’ condition. As ever, there is no substitute for experience or for the eye of a reputable dealer.

During the 20th century at least, modern-day cartoonists and politicians were a key part of the collecting base – among them Lord Baker of Dorking, better known to most as former home secretary Kenneth Baker.

He was a long-time buyer of Napoleonic cartoons before this part of his collection was sold by Bloomsbury in June 2015.

Works by Gillray, accounted for 12 of the 25 top prices achieved, his star quality demonstrated by the remarkable £15,000 bid for a copy of the 1805 commentary on power and greed, The Plumb-pudding in danger. Although nowadays, the big names have become increasingly hard to purchase at auction, Andrew Edmunds rates the best examples of Richard Newton’s (1777-98) work highly and, in terms of prints from the 1820s, he puts Theodore Lane on a level with George Cruikshank.

Richard Newton was a talent that burned brightly all too briefly. He began work at 14 and was dead at 21 but was responsible for around 300 prints which command strong prices when they appear on the market. His graphic simplicity still strikes a chord.

More than two centuries after these prints were made, it seems the themes of sleaze, the vanity and avarice of politicians and royalty, and the running commentary on the British national character, still resonate. Now why could that possibly be?

A Rowlandson revolution? Drawing conclusions as major-name works come up for sale again

Six of the best – Caricatures from specialist sale at Bloomsbury Auctions