English drinking glasses have a long collecting pedigree. Certain types have been sought out for many centuries as ceremonial accoutrements, but the idea of collecting them as objects of antique interest goes back at least to the 19th century. By 1897, the antiquarian Albert Hartshorne had published Old English Glasses: An account of glass drinking vessels in England, from early times to the end of the eighteenth century. This seminal work provided the first attempt at classification of 18th century glasses, the sector which makes up the biggest slice of this particular market. The book has now become a collector’s work in its own right – in March this year, for example, a copy sold at Keys in Aylsham for £110.

Up to the mid-1670s, English glasses, like their Continental counterparts, were made of soda glass producing thinly constructed, lightweight vessels of fluid design. The patenting by George Ravenscroft in his London Savoy workshop of glass made with lead oxide produced a much heavier, clearer product that responded well to cutting and engraving. From a luxury product for the very rich, glass gradually became more widely produced and affordable. It is for this reason that a volume of 18th century material has survived.

For today’s collector, these drinking vessels combine the appeal of attractive objects with an added element of social history.

Here, glasses are classified according to the shapes of their stems, bowls and feet; to the decoration within the stem and the method used to embellish them. All of this affords a well-defined base for enthusiasts to study the material and acquire specimens.

Equally key to collecting is the subject matter decorating the glass. It can range from simple foliate motifs around the rim to elaborate portraits or landscapes covering virtually the entire surface of the bowl. Decoration can serve a number of different purposes. It can help to identify the intended contents (apples for cider or hops for beer) or it might detail ownership, as in the case of an armorial. Glasses often serve a commemorative or ceremonial function, such as a toast to a monarch, or a reference to a secret society such as the Jacobites. Other popular subjects include political events, trade or shipping.

Drinking glasses from the 19th century afford plenty of collecting opportunities. By the late 18th century, deep cutting rather than shallow engraving was beginning to take over on bowls, stems and feet as a favoured form of decoration.

This was something that was to come into fuller force with the Regency era before the influx of Victorian decorative or ‘fancy’ glass with its many different colours and forms of embellishment. Rummers from this period (the name is derived from the continental roemer glass) are a collecting favourite. These range from simple plain examples to the so-called Sunderland Bridge glasses commemorating the opening of the iron Wear Bridge. With such a large supply, collectors can enter the field at all levels. For those starting out there is no shortage of standard 18th century wine glasses with plain funnel or rounded bowls and simple stems, perhaps with the added refinement of an opaque or clear glass thread to the stem.

These glasses, along with the small ale glasses on short feet, are very affordable with a choice available in the £50-250 bracket. As no satisfactory way to restore glass exists, condition issues from chips and cracks to re-ground bowls are key to pricing.

Buyers can expect to add a premium for a variation in bowl shape, such as a pan top or the shorter cordial and narrower ratafia glasses. Equally, add more for unusual combinations of stem threads or extra knops. As with ceramics, a date or an inscription will add value.

Even so, examples can still be found in the low hundreds – this is a generally stable market where prices have shifted relatively little over the last 20-30 years.

There has, however, been more movement in niche categories of shape or decoration such as balusters, colour twists, Jacobite glasses and the rococo enamelled wares associated with the Newcastle decorating workshop of the Beilby family.

The English baluster is one of the earliest classes of drinking glass. These were popular from the last years of the 17th century through to the first half of the 18th, and this early date makes them relatively scarce.

Many are undecorated and are collected for their pleasing sculptural form with baluster-shaped, knopped stems and large bowls. Most later 18th century wine glasses have much smaller bowls as wine was usually served in small draughts to be quickly downed and refreshed. English balusters are among the earliest 18th century glasses produced and are much sought after. This example, c.1710, featured in a sale at Bonhams in November 2019 where it sold for £6000.

Having dipped in favour 30 or so years ago, balusters started to revive in the 1990s and have been popular ever since. Good examples regularly make four-figure prices, such as the version shown above sold by Bonhams in November 2019 for £6000 (plus premium).

Prices can even stray into five figures for single glasses from two small sub-groups. These include the best Beilby enamels and some of the rarer colour twists featuring a single or combination of coloured glass threads to the stems. A short production period between 1765-80 renders both types very collectable.

Beilby glass moved into collecting prominence after the 1973 publication of James Rush's book The Ingenious Beilbys. The relatively recent sale of two prominent collections (those of AC Hubbard and Chris Crabtree dispersed between 2010-11) increased supply and took out two big buyers. But demand remains strong even if prices are not rising as fast.

At the top of the Beilby tree are pieces such as a goblet decorated with the royal arms of the House of Nassau for Prince William V of Orange that had the bonus of the signature Beilby Newcastle Pinxit. This realised £90,000 in Bonhams’ 2011 sale of glass from Hubbard’s collection. Lesser wares with simple white enamelled vine motifs can be priced under £1500. 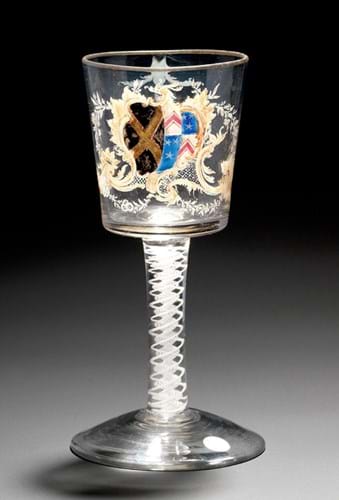 One of the most desirable forms of drinking glass decorated by the Beilby family of painters in the 1760s is that painted in white and polychrome with an armorial. This 7.5in (19cm) high goblet set on an opaque-twist stem is painted with the arms of the Beilby-Thompson family of Micklethwaite Grange, Yorkshire. Sold by Christie’s with a damaged, partly replaced foot for £13,000 in 2005 to become part of the Chris Crabtree collection of Beilby glasses, it then featured, with restored foot, in Bonhams’ December 16, 2009 sale of the first part of the Crabtree collection where it made £32,000.

Colour twist values have a pecking order based on the colours of the threads. Yellow is the rarest and most expensive, blue is deemed collectable, but red, seen more frequently, costs less. Combinations of two or more colours can also increase the value.

Glasses with decoration alluding to the Jacobites, those who supported the claim of James II's Scottish descendants to the English throne, have long had specialist appeal. These may take the form of simple wine glasses engraved with emblems of a rose and bud. Alternatively they can have increasingly expensive additional features such as the words Fiat or Redeat as an inscription, a portrait of the Young Pretender or the full Jacobite Anthem engraved on the bowl of a goblet.

Two or three decades ago these glasses were the object of much discussion and debate about just how many of them were genuine mid-18th century creations and how many were later recreations of the Jacobite romance. This affected demand and value for a while and set a premium on Jacobite material with the security of a strong early provenance.

Read more on Beilby glass in our dedicated guide.

The Jacobites and their Drinking Glasses by Geoffrey B. Seddon, Antique Collectors' Club, ISBN: 1851492070.