Among the British toy makers who exploited the new technology of die-casting in the early 20th century were Dinky in the 1930s and then later they were followed by companies like Corgi, Matchbox and Britains. 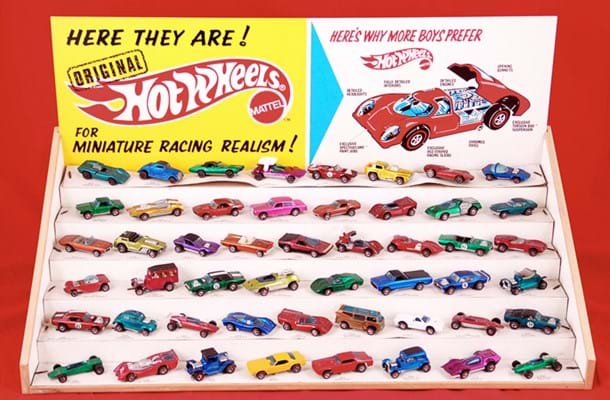 Although now familiar to generations of children, the industrial process of die-casting only came into being towards the end of the First World War. Forcing a molten alloy into a mould under pressure allowed for precise surface detail and strength. In terms of the toy makers, among the first to exploit the new technology were the Dowst brothers of Chicago with the 1920s Tootsietoys range.

Dinky toys began life in 1934 as a Meccano spin-off owned by Hornby. The first range, designed to add trackside realism to train sets comprised a tank, a tractor, a sports coupe, a motor truck, a delivery van and an open sports car, and immediately captured the public imagination.

By the 1950s they shared the international market with a host of other factories, notably Matchbox (launched by Lesney in 1952), Corgi (by Mettoy company in 1956) and Spot-On from Tri-ang whose vehicles kept accurately to a 1:42 scale. Other frequently encountered names from the 50s and 60s include Britains, Tekno, CIJ (Compagnie Industrielle du Jouet), Benbros, Budgie, Crescent, Solido, Morestone, Mercury, Taylor & Barrett and Hot Wheels.

By the time the firm finally closed in 1979, Dinky had produced more than 1000 models and numerous colour variations. The production at Matchbox was larger still. Enthusiasts know that a lifetime of collecting would never satisfy the desire to own them all.

Indeed the range is so massive that collectors tend to narrow the field and collect either by factory, by period, by vehicle type, by category - or a combination of these. Nostalgia has a big part to play. Frequently collectors will simply seek out the toys they loved as a child and this explains the popularity of the iconic Corgi TV generation toys or the range of trucks produced post-1947 as the Dinky Supertoys range.

Serious die-cast obsessives will also pay great attention to the small casting details, wheel variations and colour schemes that distinguish a rarity from the standard model. This point is graphically illustrated in the sometimes arcane market for the Matchbox Models of Yesteryear. These replicas of vintage and classic cars introduced by Lesney in 1956 were occasionally produced in multiple colour variations: there are, for example, more than 40 different versions of the Duesenberg Model J Town Car that can range in price from £5 to £5000. Price guides and catalogues are essential for identification. Pre-production models or those specifically produced for export overseas also provide rarities. With regard to Dinkys, these include issues from the French Dinky factory operating in Bobigny from 1954 until 1972, others produced in Spain through the 1970s until the early 1980s and a series of rare models produced under license in South Africa to avoid local taxes. Additional models were produced in Hong Kong and in India using old dies. It was a previously unrecorded van made for the Spanish or South American company Omnisport, c.1954, that sold for £6400 at Wallis & Wallis in Lewes, East Sussex in June 2009.

It is more typical for collectors to be obsessive regarding condition. That so much survives from the golden age of die-cast toys is a tribute to the engineering and strength of these tiny models (the French firm Solido once boasted that its toys were strong enough to double as roller skates) but it has placed a huge financial premium on those few toys that were never played with.

A whole collecting vocabulary has grown up around the pursuit of perfection - the word 'mint' indicates an item with no wear or defects, while 'mint and boxed' refers to  a toy without imperfections and in its original packaging (from 1954 most Dinky toys were sold in individual boxes).

A little further down the scale are 'near mint', 'excellent' and 'very good',  while the battered example that saw childhood action is described as 'playworn'.

The terminology is key as only the scarcest models have any significant value when in poor condition. Typically, paint chips, damage, and restoration will have a huge impact on price and a shabby or repainted example will fetch a fraction of another in pristine condition. In recent years, fuelled by the belief that near-mint condition vehicles with original boxes have the best investment potential, packaging has become more and more important. An original box can be worth as much as the toy itself - more in the case of the Corgi TV related toys when the colours and condition of the box and the presence of instructions, plastic missiles etc, separate the exceptional from the ordinary.

There are condition issues peculiar to certain models. Some of the earliest Dinkys are susceptible to metal fatigue - a result of contamination in the alloy that originally contained lead - while decay to the 'bubble' packaging of some relatively recent Corgi productions from the 1970s has raised questions about their long term survival.

There is a definite hierarchy in die-cast collecting. There are rarities in every field but it is generally the case that the smaller the factory, the smaller the buying audience. Accordingly, it is Dinky, Corgi and Matchbox toys (in that order) which dominate the collecting landscape.

In the 1970s Dinky may have lost market share to the realism of Corgi or the fun of Hot Wheels, but they have few competitors in the marketplace today. Dinky toys were very simple (it was only in response to competition that they introduced windows, opening doors, detailed engines, steering, etc) but they had a real charm. The Dinky market started out with collectors from Britain and Commonwealth countries, but interest is now truly international with strong buyers in America, Japan and Europe.

That said, it is important to remember that the majority of even boxed Dinkys can still be bought for under £200 and most surviving playworn toys are priced between £5 and £50 each. If anything, today's buyers, who are exposed to the huge scale of the global market via the internet where so much toy dealing takes place, are more rather than less choosy about condition. 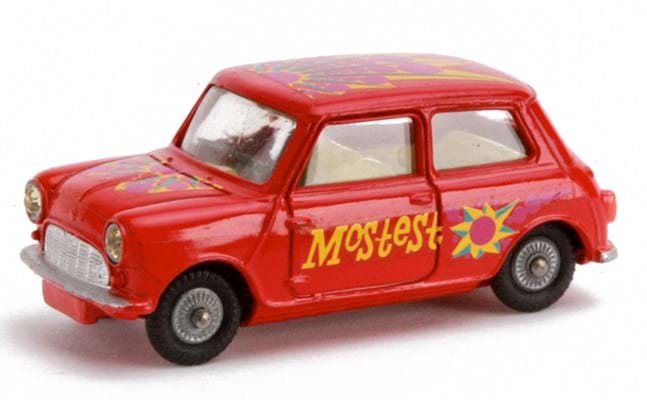 Accordingly, while a swathe of new investors has entered the market in recent years, demand continues to wax and wane across the many niche collecting fields. Upwardly mobile collectors in their 50s and 60s have pushed prices higher for the vehicles they remember from childhood, particularly the Dinky trucks and advertising vans from this period such as the maroon 'first series' Foden chain lorry bid to a record £10,200 at Vectis of Stockton-on-Tees in 2003.

Prices have undoubtedly softened for some of the earlier toys that no longer connect so directly with the collecting audience. Nevertheless, the holy grail of Dinky collecting remains the pre-War delivery vans advertising commercial brand names. Surviving 'first type' vehicles are rare in any state, but condition, as always, is key.

This was reinforced in March 2008 when Vectis sold one of only two known boxed sets of six Type 1 vans bearing nationally recognised trade names for £30,000, and a one-of-a-kind van bearing the name W.E. Boyce, a cycle shop on the Archway Road in Highgate in the 1930s, for a record £17,000.

Hotwheels stand on the podium for Pippa