When you see a portrait by Philip de László (1869-1937) in an auction catalogue you tend to know what you’re getting: a handsome depiction of a wealthy sitter, often with a large dollop of early 20th century glamour.

The list of his sitters reads like an edition of ‘Who’s Who’, not least due to the number of heads of state he painted, such as the kings and queens of Greece, Spain, Romania and the UK (including the current monarch, when still a princess), the emperors of Austria and Germany, not to mention several archbishops, a pope and the US President Calvin Coolidge.

The Budapest-born artist also received plenty of lucrative commissions from aristocrats and businessmen, especially after he moved to England in 1907.

Fortunately for de László this was a time when John Singer Sargent had virtually retired, leaving a clearer path for him to become the leading ‘society’ portraitist of the day.

The fact that works continue to appear regularly at auction is in large part due to his prolific output. He painted over 4000 works, around 2000 of which now have detailed entries in the online catalogue raisonné (see delaszlocatalogueraisonne.com).

De László worked at tremendous speed – he often used a ‘sight-size technique’, placing the sitter and canvas side by side and then shifting energetically between the two, applying paint and then retreating to judge the progress from a distance.

This produced a fresh and vivid style which, his followers would say, combines with his natural ability to capture the character of the sitter (and even the era in which they lived) to give his work an appeal that still resonates strongly.

Indeed, his portraits still routinely generate high demand on the current market even with the plentiful supply that regularly becomes available.

At auction they tend to generate competition between a core group of dealers that operate in this market and wealthy private collectors. The latter may be attracted more to the artist – it is often said there are plenty of buyers out there who just want to own a de László – or the specific sitter, although a mix of the two in equal measure is most likely often the case.

Although formal portraiture is generally not one of the stronger sectors of the art market, prices for de László remain buoyant, as proved when a portrait of Anglo-Irish society hostess Oonagh Guinness fetched $275,000 (£214,800) at Atlanta auction house Ahlers & Ogletree in September 2020 (see ATG No 2460). It was the second-highest price for the artist at auction.

Commercially, de László’s most striking portraits of famous women such as the above picture command the highest prices. Bar a handful of works, almost all of the top 50 auction prices have come for female sitters.

So, when an elegant study of Lady Northcliffe wearing a large hat emerged at Moore Allen & Innocent (21% buyer’s premium) in Gloucestershire it was always likely to draw interest.

This was especially true because of its provenance – the vendor was the great-niece of the sitter. Living locally, the family has sold items through the Cirencester saleroom over many years including through various periods of downsizing. Indeed, Moore Allen & Innocent had valued this same portrait for insurance at £10,000 some time ago.

The 3ft x 2ft 4in (91 x 71 cm) oil on board was signed and dated 1911 and came with an intriguing backstory. Unlike the majority of de László portraits at auction, it was not a straightforward commission.

Three years earlier the artist had painted Lady Northcliffe’s husband, Alfred Harmsworth, 1st Viscount Northcliffe, the owner of the Daily Mail – a portrait still owned by Associated Newspapers and apparently still hanging at Northcliffe House, the publisher’s London headquarters. De László painted it in four days and also made a sketch of Lady Northcliffe at the time.

For the current picture, it seems that de László had instead asked Lady Northcliffe “to give me the opportunity to paint her portrait” and later politely declined an offer for payment from Lord Northcliffe.

Although she gave the finished portrait to her husband as an unexpected gift and it has never left the sitter’s family, the work became fairly well known soon after it was painted as it featured in an Agnews exhibition as well as in editions of The Illustrated London News and Country Life – in the latter it appeared as the frontispiece in a 1911 edition devoted to the Northcliffe home, the Tudor manor house of Sutton Place in Surrey.

Aside from marrying into the famous newspaper dynasty, Mary Elizabeth ‘Molly’ Northcliffe (née Milner) had a fascinating life. According to her obituary in The Times, she had ‘surprising physical courage’, being able to calm the most difficult horses, going down South Africa’s deepest mine and being one of the first women to undertake a long motoring journey and take a flight on a passenger jet.

At the end of First World War she organised an auction of jewellery donated by high society figures to raise money for wounded troops, raising £94,000 at Christie’s in December 1918. She had lost four nephews in the war.

Mary died aged 95 and, since she had no children, this painting in Cirencester ended up descending through the family of one her siblings.

The portrait captured her in her prime wearing a wide-brimmed hat and jewelled necklace. It was in good condition with no overpaint or restoration visible under UV light, although it had some minor scratches to the surface and would benefit from light clean.

The saleroom’s senior auctioneer Philip Allwood told ATG that growing numbers of bidders are participating without actually physically viewing the work (particularly on higher-end lots) and instead rely on the photos uploaded to the catalogue. This was why the saleroom uploaded no fewer than 47 images for this lot. “When it comes to leading de László buyers, they like to know what they’re looking at”, he said.

The auction house contacted The Daily Mail, a representative of which showed interest although it was unclear if that led to a bid on the day. In any case, strongdemand emerged as expected with several parties vying for the work and it was eventually knocked down at £32,000 to an online bidder from the Bristol area.

The price falls within the artist’s higher range, even if not at the very top level, and the sum appears to be the highest for de László at a UK auction outside London. Offered at the three-day sale on June 15-17, the 3ft 10in x 3ft 2in (1.17m x 96cm) oil on canvas came to auction as part of a group of Hungarian paintings and was the star attraction. It depicted the three-time prime minister of Hungary, Sándor Wekerle.

The Liberal politician, who was the first non-aristocratic prime minister to hold office, commissioned de László in 1894 after seeing a portrait of Dezsó Szilágyi, the minister of justice in Wekerle’s first administration. With the two men getting on well as the portrait was made at Wekerle’s estate in Dános, the prime minister influenced de László’s subsequent career, providing him with a personal recommendation that helped gain him a commission to paint Prince Ferdinand of Bulgaria, de László’s first royal commission.

One of two portraits that de László painted of the prime minister (the other was from two years later), it was in generally good original condition without having undergone any restoration, although the canvas was sagging a little in the corners and needed re-stretching.

With the bar for de László’s male portraits decisively lower than his female subjects, it was pitched at £4000-6000 and sold at £15,000 to an overseas buyer (although not from Hungary).

As the results of these two works sold underlined, when it comes to de László pictures glamorous women stand at twice the level of their male counterparts – even a prime minister. 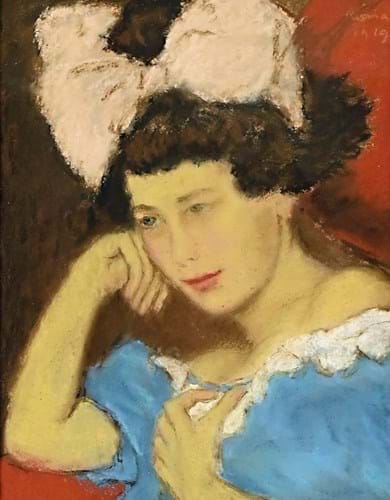 Pastel on paper portrait by Jozsef Rippl-Rónai – £11,000 at Mitchells.

Another portrait by a Hungarian artist from the same source that went over estimate at Mitchells was a pastel on paper by József Rippl-Rónai (1861-1927).

Measuring 19 x 15¼in (48 x 39cm), it was signed and dated 1919 and depicted a sitter called Edit de Lukacs Lessner whom the artist seemingly painted a number of times in various guises.

Rippl-Rónai is regarded as an important name in late 19th century and early 20th century Hungarian art and his auction record stands at a hefty £650,000 for a large oil painting sold at a Budapest auction last December.

He moved to Paris in 1887 to study under his compatriot Mihály Munkácsy and met Paul Gauguin and Aristide Maillol, the latter with whom he developed a long-standing friendship. While his works were exhibited in Paris from the mid-1890s onward, few emerge on the secondary market today outside his homeland, although another portrait of a woman (of his future wife Lazarine Baudrion) fetched £57,600 at Christie’s in London in 2007.

The work in Cumbria had some characteristic features including the way the artist used sinuous contours to outline the figure. Estimated at £6000-8000, it sold at £11,000 to the same buyer as the de László.

The simple but charming style of J Fisher