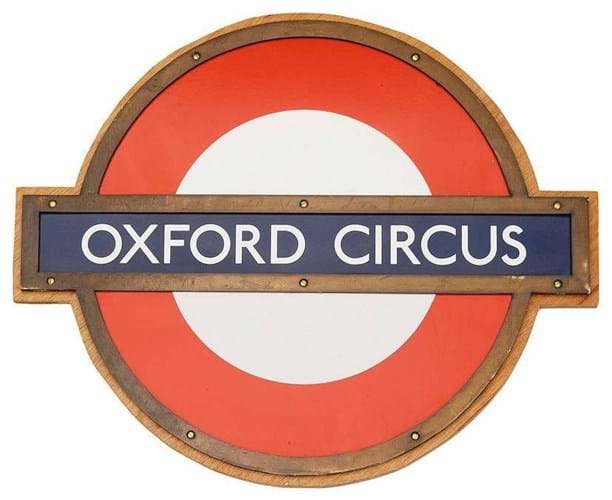 Following a sale of Westminster street signs in April, Catherine Southon in Chislehurst is holding a single-owner private collection of transport signs and ephemera as a timed online event from September 10-24.

The collection consists of over 300 objects collected by an enthusiast since childhood including underground and railway signs, signage from trams, buses and trolleybuses, maps, posters, paintings and other ephemera.

This London Underground Oxford Circus enamel ‘bullseye’ sign in a bronze frame has an estimate of £1000-1500. This early 19th century patchwork quilt (detail shown) is estimated at £3000- 5000 in Tennants’ Costume, Accessories and Textiles Sale on August 21. It incorporates pieces of an 18th century textile, embroidered with floral sprigs and flower heads. The factory was founded in Moscow in 1804 and acquired by Alexei Popov in 1811. It then passed down through three generations of his family until it closed in 1875.

The plate measures 17½in (44cm) and has very fine and ornate all-over floral painted and gilt decoration. Comic Book Auctions is offering TV Century 21 (1965- 67) issues 1-140 with the elusive free gift ‘Special Agent Identicode Card’ with No 1 and ‘Special Agent Badge and Secret Coded Message Forms’ with No 2.

The 140 issues are completed with the scarce Thunderbirds Are Go 52-page special from 1966. An estate clearance conducted as a timed online auction in Stafford by William George includes this George III sealed wine bottle won by an owner in the 1950s. The bottle was from Cotehele House in Cornwall and has the Edgcume family seal (detail right). More than 950 lots include, estimated at £200-400, this pair of early 19th century Wedgwood three-colour jasper ware pedestal vases and covers. Each has a central roundel depicting a Pegasus and a putti final and stands 14in (35cm) high.

From modest beginnings on Orkney, Mowat-Thomson (1933-2019) became a well-known teacher of dance and drama and a collector who liked to furnish in the grand Georgian style.

mctears.co.uk or see this item on thesaleroom.com On September 5, North Shields auction house Featonby’s is selling this Aynsley 20-piece tea service with a guide of £400-600. The coveted butterfly handle design dates from c.1931.

featonbys.co.uk or see this item on thesaleroom.com 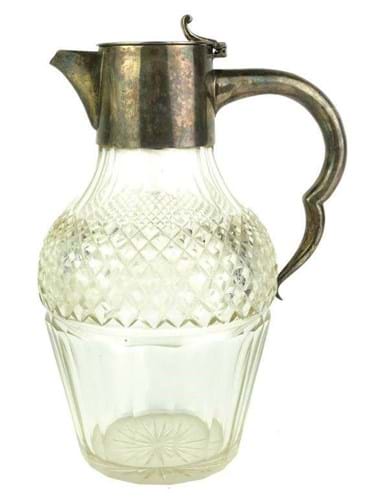 This silver and cut-glass claret jug with mounts hallmarked for J Sherwood and Sons, Birmingham, 1910, has a guide of £100-200 at Swan Fine Art of Tetsworth, Oxfordshire, on September 2-3. Trevor Cherry’s football shirt believed to be from the 1975 Leeds Utd v Derby County match which featured ‘the greatest fight in English football’ – £2800 at Hansons on August 24.

A football shirt believed to be from a 1970s game which featured ‘the greatest fight in English football’ is up for auction on August 24. The yellow jersey belonged to Leeds United player Trevor Cherry. He scored in the match that took place on November 1, 1975, which Derby County won 3-2. But the game is better known for the feisty punch up between the Rams’ Franny Lee and Leeds defender Norman Hunter.

It has been consigned by Notty Hornblower, a lifelong Derby supporter and owner of Hope House Costume Museum in the Peak District village of Alstonefield – and Hansons’ vintage clothing consultant. She said: “I won the shirt in a raffle at a sports club event in the 70s, possibly a DCFC supporters’ club night. I remember being told it belonged to Trevor Cherry and had come from that famous game in 1975.”

Cherry, who died last year, captained Leeds and played for them for 10 years from 1972. Hunter also passed away in 2020 – one of several members of that great 1970s team who have died recently, including Jack Charlton, Terry Cooper, Peter Lorimer and Mick Bates. On August 28 Glasgow firm Great Western Auctions will offer items from the estate of curator, gallerist and writer William Hardie (1941-2021). He worked at Christie’s Scottish picture department from 1977-84 and later traded as William Hardie Fine Art in Glasgow. One of the dance purses is 9ct gold and constructed in chain mail while the other is of gilt metal in a similar style.

Countess Spencer, Princess Diana’s paternal grandmother and great-grandmother to Prince William and Prince Harry, was born Cynthia Ellinor Beatrix Hamilton. She married Viscount Althorp in 1919 and was appointed Lady of the Bedchamber to Queen Elizabeth in 1937. She continued the role after Elizabeth became Queen Mother in 1952 and remained in the post until her death. The sale Homan Potterton – A Lifetime of Collecting features just under 250 lots across a number of collecting and furnishing disciplines. This 9ft 11in x 8ft 5in (3.01 x 2.51m) Dun Emer Guild wood carpet with central Celtic medallion is guided at €1500-2500. Made c.1725, the gilt decoration of landscapes and hunting scenes was probably done at the Augsburg workshop of Abraham Seuter. All pieces except the hexagonal tea caddy share the sale decorator’s initials LS to the base while the tea pot and coffee pot have Augsburg silver gilt mounts for Elias Adam.

A similar Böttger hunting themed service, the so-called Schimmerlmann service, was sold at Sotheby’s in 2003. Designed by Miraman, the black silhouette of a steam train drives towards the viewer at the centre of the image; in the background is a silhouette of an island with camels and an elephant standing by the shore.

Held in Paris in 1931, the exposition attempted to demonstrate the cultural diversity and variety of resources within the French empire. One of more than 1200 Jackanory storyboard ink and watercolour illusrations being sold by Ewbank’s during a timed auction finishing on August 22.

As well as the stories themselves on TV series Jackanory (1960s-90s), it was the performances from actors such as Rik Mayall, Bernard Cribbins, Margaret Rutherford, Victoria Wood, Judi Dench, Martin Jarvis and Kenneth Williams that enticed viewers.

More than more than 1200 of the storyboard ink and watercolour illustrations that also helped bring the tales alive across the thousands of episodes are being sold by Ewbank’s during a timed auction finishing on August 22.

The stories would each have run over five days of broadcasting, requiring numerous illustrations to accompany the reader’s performance.

For the most part Ewbank’s has lotted pictures from the same story together, dividing them into five lots, one for each broadcast day, with an average of 10-15 pictures each, creating more than 100 lots. Most are estimated at between £50-150.

ewbanks.co.uk or see this item on thesaleroom.com