A round-up of art and antiques news from the previous seven days, including a report on fakes in the vintage whisky market. Rare bottles of whisky being tested by the Scottish Universities Environmental Research Centre (SUERC), a research centre within the University of Glasgow’s College of Science & Engineering.

More than a third of a sample of vintage bottles of Scotch whisky tested in a Scottish laboratory has been found to be fake.

Due to growing concern about the proliferation of fake whisky in the secondary market, RW101 had teamed up with the geochemistry experts to undertake the study.

From 55 bottles bought by RW101 from different sources through the secondary market, 21 were confirmed as “either outright fakes or whiskies not distilled in the year declared”.

The testing found “all malt whisky samples purporting to be from around 1900 or earlier were found to be fake”.

The UK government’s ivory bill has received Royal Assent from the queen to become the Ivory Act 2018. The queen has formally agreed to make the ivory bill, which proposes a near-total ban on the trade in ivory, into an Act of Parliament.

However, the bill is not expected to come into force until late 2019, later than some experts had predicted.

Regarding the timing of the enforcement of the law, a Defra spokesman said: “Time is required to make sure the ban can be implemented effectively and robustly. Secondary legislation is required to do this, an online registration system needs to be developed and guidance to be issued.

“It is critical that all of these elements are in place before the ban can be put into effect.” Shrewsbury’s Halls Fine Art Auctioneers has hired auctioneer and valuer Joseph Trinder from Dawson’s Auctioneers in Maidenhead, Berkshire, where he had worked since March 2017. Trinder is a past president of auctioneer body NAVA Propertymark. At 21, he was the youngest to hold the post.

He was previously at Wotton Auction Rooms for five years.

The role at Halls will include business development to “establish new relationships and source consignments from a wider region” for the Shropshire auction house.

Maxine Winning joins as an auctioneer and valuer in its London office. Most recently she worked at Leonard Joel auction house in Melbourne, Australia.

Harrison Goldman joins Dawson’s as a valuer and to focus on business development in the London office. 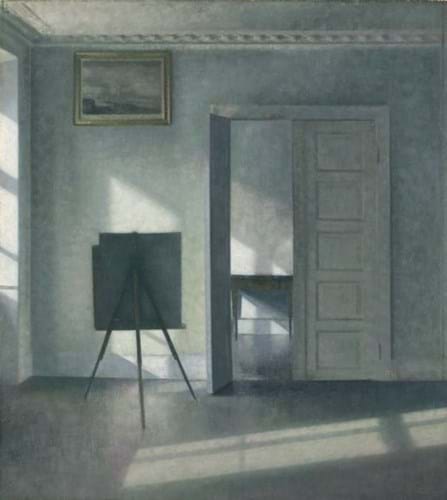 The J Paul Getty Museum in Los Angeles has bought a painting by Danish artist Vilhelm Hammershøi (1864-1916) barely months after it fetched a major sum at auction. The sparse but carefully orchestrated composition depicting the artist’s apartment in Copenhagen had appeared at Christie’s New York in October.

The Getty has confirmed that it acquired the work from New York dealership Jack Kilgore & Co following the sale at Christie’s.

The price for Interior with an easel, Bredgade 25 from 1912 was the second highest at auction for Hammershøi. Commercially it stands only behind an earlier work from 1901, Interior with woman at piano, Strandgade 30 that made $6.21m (£4.74m) at Sotheby’s New York in November 2017. George Kidner Auctioneers and Valuers is to close following the retirement of its founder. Kidner started in the auction business in 1977 when he worked at Phillips in London followed by stints at Bonhams and Sotheby’s.

He set up his own saleroom in 1991 in Hampshire.

The final sale at the auction house in Lymington takes place on January 10, 2019 and viewing begins on January 8.

The business will close at the end of February.

Auction house Phillips is moving its New York operation to a new home, at 432 Park Avenue next year. The new base includes Park Avenue Cube, a white-glass modernist structure of more than 5000 sq ft across two floors on the north-west corner of 56th Street and Park Avenue, plus 30,000 sq ft of office space.

The most clicked-on stories for week December 13-19 on antiquestradegazette.com

Beyond Brexit: The new reality and changing landscape for the art and antiques market in 2019