Despite laws instructing goldsmiths to send their wares to Edinburgh (and later Glasgow) for hallmarking, many silversmiths from the burghs of Scotland enjoyed sufficient independence from the assay office to use local marks. 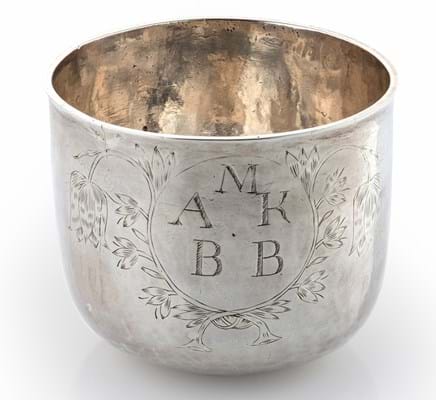 They did this to avoid the perils of travel and (after 1784) to escape paying duty in a region where a heathy distain for the Hanoverians persisted well into the 19th century.

Currently some 30 different centres of production are recorded, from Arbroath to Wick. Their legacy is an extraordinary array of town and makers’ marks that have intrigued collectors for more than a century.

Collectors and the Market

The best-known Victorian collection of Scottish provincial silver was amassed by nobleman and liberal politician Gavin Campbell, 1st Marquess of Breadalbane (1851-1922), and it was his extensive holdings which formed the main reference for the (often inaccurate) Scottish sections in Sir Charles Jackson’s first edition of English Goldsmiths and Their Marks in 1905.

As Scottish silver began to emerge from the family homes where it had rested for generations, Jackson’s endeavours (revised in 1921) were followed by a series of museum exhibitions in the immediate pre- and post-war eras and, in 1956, by the publication of Scottish Gold and Silver Work by Ian Finlay.

This important but flawed work, revised in 1991 by Henry Fotheringham, was the catalyst for the first focused studies on centres such as Dumfries, Inverness, Dundee and Perth. The first dedicated sales of Scottish silver emerged in the 1980s. For many collectors, the aim is to acquire at least one piece from each silver-making centre, although there are distinct financial obstacles to achieving this. For example, only a handful of pieces from Stonehaven and Ellon are recorded, and even a teaspoon carrying these marks will bring a four-figure sum.

Some collectors focus upon one town while others will target a single ‘hammerman’ who used a broad range of different marks.

Richard Turner, retired data communications engineer and a collector of more than three decades, embarked upon the monumental task of publishing the 1400-plus marks of around 350 regional Scottish silversmiths in 2003.

In A Directory of Scottish Provincial Silversmiths & Their Marks – the bible of today’s collecting hobby – Turner lists over 30 different combinations of the marks used by James Erskine of Aberdeen alone, some with the traditional three turrets associated with the Granite City, others with a hand and dagger, a boar’s head, a cockerel or a thistle.

All in the Marks

The significance of many motifs on Scottish provincial silver remains mysterious but the value is often purely found in the rarity of these marks.

Fiddle pattern teaspoons are the most commonly found form – an Edinburgh example worth perhaps £5, one from Aberdeen around £25 but one made in nearby Stonehaven £3000-5000. It’s the difference 15 miles can make. Like the stamp collecting to which it is sometimes compared, provincial Scottish silver is a relatively small field with prices rising and fall depending on collecting preferences. It is also still an area of unknowns. Part of the allure to those interested in genealogy and social history are the numerous marks not yet satisfactorily ascribed.

Scholarship based on the first principles of parish records continues to shed light on a subject where the absence of date letters means any biographical information is of particular value.

A Directory of Scottish Provincial Silversmiths & Their Marks by Richard Turner, 2003.